Sly Little Fox, the homebred filly bred, raised and raced by Bambi Fox of Kentucky, timed her attack just right to score the win in the $11,500 conditioned trot at Miami Valley Raceway Sunday, Jan. 9. The mare earned the win in 2:01.0. 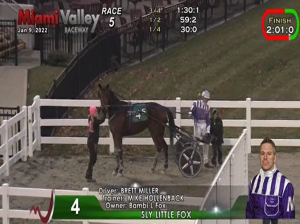 Sly Little Fox and Brett Miller started from post four but it was Telling the Story and Trace Tetrick who got the early attention, trotting out for the lead through fractions of :30.0, :59.2 and 1:30.1. Sly Little Fox sat in fifth early on. An outer flow of traffic had formed heading into the final turn, but when the tempo stalled, Sly Little Fox had to tip three wide to get into position for the stretch drive.

In the stretch, Kissn Kitty and Josh Sutton found room to get around Telling the Story and matched Sly Little Fox stride for stride down the lane. In the end, Sly Little Fox was able to get a head in front of Kissn Kitty for the win. Starglider and Tony Hall moved up for third.

Sly Little Fox paid $4.20 for the win. The Swan for All four-year-old mare, trained by Mike Hollenback, was making her first start of 2022. Fox. She is now four for six in her brief career as she only started once as a two-year-old. Her career best time was recorded in late 2021 at Miami Valley in 1:58.4. She now has more than $25,000 in career earnings. Sly Little Fox has both a two-year-old and a three-year-old sibling, both by Muscle Massive, that will be pointing toward starts in 2022.

Later on the Sunday card, Miss Smead and Trace Tetrick scored a win in the $17.500 conditioned trot for fillies and mares. Starting from post three, Miss Smead never saw the inside early on, parked through the first half through fractions of :28.2 and :58.3. She eventually overtook race leader Ima Diamond Babe and Tony Hall at the three quarters in 1:26.4 and powered home to a three and one-half length win in 1:55.3, a final quarter in :28.4. Rose Run Valor and Kayne Kauffman finished a quick closing second over Parkhill Lancelot and Mitchell Cushing, who finished third in the three-horse photo for second and third.

Miss Smead paid $5.80 for the win. The five-year-old Guccio mare is trained by Don Eash and owned by his Eash Racing Stables Inc. Pond-A-Acres and Martz Creek Farm bred the mare, who earned her 15th career trip to the winner’s circle with the win. Miss Smead began her career on the Indiana Sired Fair Circuit before successfully converting over to the pari-mutuel ranks. She now has more than $129,000 earned for Eash. Her career best time was taken last year in 1:54.0 at Harrah’s Hoosier Park.