It was a night of longshots Saturday, Nov. 19 as seven of the 14 races were won by longshots paying double digits. One of those longshots was Sly Little Fox and Atlee Bender paying a big price in the  $16,000 Open 3 Trot at Harrah’s Hoosier Park. 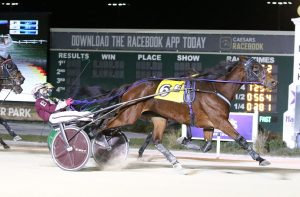 Starting from post six, Sly Little Fox went to the back of the pack at the start as Breckenridge and Dan Shetler set the early fractions of :28.1 and :56.4. Enhance Yourcalm N and Brandon Bates were on the outside to challenge at the half tracked closely by Bluebird Maverick and Sam Widger, also looking to advance.

Sly Little Fox was still following along at the three-quarters but at the top of the stretch, she came to life. The four-year-old daughter of Swan For All trotted home in :28 seconds to score the win by one length over Brookview Bolt and John DeLong. Annas Lucky Star and Kyle Wilfong finished third in the mile timed in 1:55.2.

Sly Little Fox is a homebred for owner-breeder Bambi Fox. She paid $79.60 for the win. It was her eighth win of 2022 and the victory also pushed her over the $100,000 mark for her career. The Indiana sired mare had a great start to 2022 and won several rounds of series action at Hawthorne before venturing into Indiana. Mike Hollenback handles the training for Sly Little Fox, who is 11 for 24 in her career.

In other Saturday trotting action, Big City Pearl won the evening’s feature in the $22,000 Open Trot. The four-year-old daughter of Chapter Seven was on the outside at the quarter in :27.2 before moving on and taking over.

At the head of the lane, Big City Pearl was leading the way with authority. She was able to scoot home in :28.2 for the win by one length in 1:55.2. Pick Me Upper and Brandon Bates finished second over I Know My Chip and Sam Widger for third.

Big City Pearl was the favorite, paying $5.00 to win. The trotting mare is owned by Lyndar Stables and Woodside Farm. Erv Miller trains the mare, who now has 10 wins in 28 starts for 2022. She is closing in on $300,000 in career earnings. All three of her racing years have been centered around Harrah’s Hoosier Park. Her career best time of 1:52.3 was taken last year at three at Harrah’s Hoosier Park.