Sly Little Fox and Michael Oosting turned in a dominant performance in the second round of the Winter Wonderland Series at Hawthorne Racecourse Sunday, Feb. 13. The duo covered the one-mile event in a time of 1:57.3. 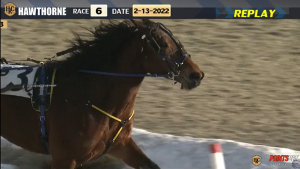 Sly Little Fox has now won both legs so far in the Winter Wonderland Series at Hawthorne Racecourse Sunday, Feb. 13 with Michael Oosting in the bike.

Starting from post three, Sly Little Fox was ready to go when the gates closed. She was on top by open lengths at the quarter in :30 seconds and continued to lead the way through fractions of 1:00.0 and 1:29.2. She saved the best for last, picking up the tempo around the final turn to trot home in :28.1 for the win by four and one-quarter lengths. Spice-It-Up and Casey Leonard finished second over Romantic Warrior and Gary Rath for third.

Sly Little Fox was the favorite of the field, paying $2.80 for the win. The four-year-old Swan for All mare is trained by James Eaton and is owned by Bambi Fox, who bred and raised the mare. She is now three for four in 2022 and six for nine lifetime. Her career bankroll now tops $38,000 and her win in the series marks a new career best.

Earlier on the Hawthorne card, another Indiana sired horse brought home a win. Do Tell Lady, a three-year-old daughter of Tellitlikeitis, turned in a gate to wire effort for the win in 2:01.0. Driven by Travis Seekman, Do Tell Lady was a winner by three-quarters of a length over Play My Game and Brandon Bates. Ryans Secret and Archie Buford finished third.

Do Tell Lady was the favorite of the field, paying $2.60 for the win. Perry Smith owns and trains the sophomore filly, who was bred by Mary Jeffers and Adele Everett. It was the first win of the season for Do Tell Lady, who earned her career best time of 1:57.3 last season at Hoosier Park. It was also her third career win in 12 starts with career earnings now over the $15,000 mark.