Skyway Quinton, the four-year-old son of Real Desire, is now on a two-race win streak. The gelding scored his seventh win of 2019 in 12 starts at Yonkers with Mark MacDonald at the controls. It was his quickest mile of 2019 as he won in 1:52.0. 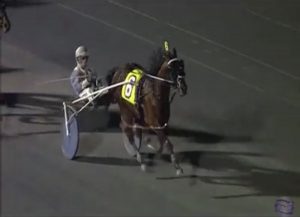 Sarah Conrad captured this photo of her horse Skyway Quinton, who has won his last two starts at Yonkers Raceway this year. (Photo by Sarah Conrad)

Skyway Quinton now has 18 wins in 53 career starts. His quickest mile was recorded in May when he dipped below the 1:50 time barrier, pacing his mile at The Meadowlands in 1:49.0. The Indiana sired gelding, who was bred by Midland Acres, Inc. of Ohio, was purchased by the Conrads for $9,500 from the Hoosier Classic Yearling Sale in 2016. He has now earned more than $173,000 in purses.