Skyway Jaguar, the veteran Indiana sired trotter, soared to victory Friday, March 4 with driver Jim Marohn Jr. in the bike. The gelding scored the win in 1:59.3. 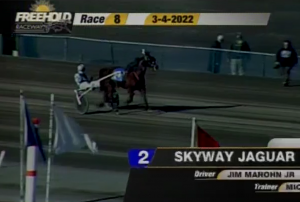 Starting from post two, Skyway Jaguar was out and rolling early, securing the top spot before the field hit the first turn on the half-mile oval at Freehold. He was tracked closely by Gemini Eddie and Eric Abbatiello through the quarter in :29.3 and half in :59.4. By the halfway mark, the two had pulled away from the rest of the field by open lengths and there was no action heading to the outside to form a second tier.

Heading to the three-quarter mile marker, Skyway Jaguar was still in control at 1:29.2 and King Cast and Austin Siegelman led the charge on the outside, flushing out Gemini Eddie in the final turn.

In the stretch, Gemini Eddie gave it his best shot to get by Skyway Jaguar, who got a little rough midway down the stretch, but held it together to trot home for the win, a neck ahead of Gemini Eddie. King Cast moved up for third.

Skyway Jaguar paid $7.60 for the win. He is trained by Michael Polhemus for Michael De Pietro, who acquired the horse last fall. The nine-year-old gelding earned his first win of 2022 in five outings. Overall, he has 30 wins in 189 starts with earnings nearing the $200,000 mark. His career best time was taken as a three-year-old at Dover Downs in 1:54.1.

Skyway Jaguar, who was bred by Kenneth Slabach, began his racing career on the Indiana Sired Fair Circuit at two under the direction of Jay Cross before advancing to the pari-mutuel ranks at three. He is the final foal from the mare Jamie Hall, who is a daughter of Garland Lobell. He is a half-brother to Skyway Jaylo, who has a mark of 1:55.4 and more than $141,000 in earnings. She is now a brood mare herself and her first foal, Skyway Fearless, a colt by Whom Shall I Fear, is a two-year-old in 2022.

Skyway Jaguar was a $7,500 purchase from the Hoosier Classic Yearling Sale. He was only one of 47 sold that year by Jailhouse Jesse and comes from a pretty impressive class that includes Bridge to Jesse’s.