There was a reason Skyway Bebop was the heavy favorite in the $21,000 Winners Over Trot at Dover Downs Tuesday, March 29. The Indiana sired trotter came into the race with two wins on the year and came out of the race with three. 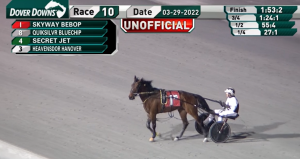 Skyway Bebop and Tony Morgan return to the winner’s circle after winning their third race in four starts at Dover Downs this year.

Skyway Bebop and driver Tony Morgan never had a chance to leave for the lead at the start from post one. Several horses left with authority with outside starter Quiksilvr Bluechip and Victor Kirby reaching the top spot before the quarter in :27.1. Skyway Bebop sat comfortably in fourth through the half in :55.4. Heading down the backstretch for the second time, Skyway Bebop was sitting inside waiting to be flushed to the outside by the outer flow, but when that never happened, Morgan pulled on the right line and moved out.

With a big burst of speed, Skyway Bebop trotted gamely toward the leaders and circled the field. The smooth gaited trotter who wears trotting hopples passed the three-quarters in 1:24.1 and kept on going. She opened up on the field by six and eventually won by an easy seven lengths in 1:53.2. Quiksilvr Bluechip held his ground for second over Secret Jet, bred by Silver Linden Farms of Indiana, with Allan Davis in the bike for third.

Skyway Bebop paid $5.00 for the win. The five-year-old Guccio mare is owned by Niss Allen Inc. of New Jersey and trained by Tim Crissman. Karl Slabach bred the mare, who has only missed the top three twice in eight starts for 2022. Overall, she has 16 wins in 45 starts with more than $73,000 on her card. Her quickest time of 1:53.1 was taken earlier this year at Dover Downs.

Skyway Bebop is a recent acquisition by her current connections. She started out on the Michigan fair circuit as a two-year-old with limited starts before returning at three and breaking her maiden at Hawthorne in a preliminary round of the Busse series under the direction of trainer Larry Lee Smith. After racing at Hawthorne earlier this year, Skyway Bebop transferred hands to her current connections at Dover and has won three of four starts.

Skyway Bebop is one of three foals from the Broadway Hall mare Broadway Line, who has a mark of 1:57.2 and more than $43,000 during her racing career. She has a three-year-old half brother named Innovator Tab by Mr Cantab, who will race in 2022.