Skyway Ballistic and Dave Palone kept their record perfect for 2023 Friday, Jan. 20 with a win in the $15,000 claiming handicap at The Meadows. The duo have now won three straight races. 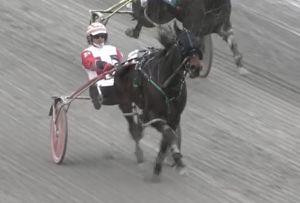 Skyway Ballistic and Dave Palone rally to their third straight win at The Meadows Friday, Jan. 20.

Several horses left the gate with early speed, but it was Skyway Ballistic that had the most momentum, crossing over to the lead in the first turn from post five. From there, High Impression, another Indiana sired horse, sat in second for driver Aaron Merriman to the quarter in :27.4 and half in :57.3. There was no movement as the horses followed along in single file until the field neared the three-quarter mile marker.

Jim Rocks and Hunter Myers made a quick move to the outside and had intentions of surprising Skyway Ballistic and getting the lead, but Skyway Ballistic was up for the challenge and repelled Jim Rocks. In the stretch, Skyway Ballistic began to veer out but maintained his speed and was an easy winner by four lengths in 1:54.0. High Impression, a son of Rockin Image, held his ground inside for second over Jim Rocks for third. High Impression was claimed out of the race by Christen Pantaleano.

Skyway Ballistic was the heavy favorite, paying $4.20 for the win. The seven-year-old Always a Virgin gelding is owned by Darius Oshidar and Gianna Pirillo. Justin Pirillo trains the gelding bred by Lyle Slabach.

Skyway Ballistic is a new acquisition by his current connections and was claimed out of his last race for $10,000. He handled the step up in class with authority and has been claimed twice out of his two previous starts before his latest win.

Skyway Ballistic started his career at Harrah’s Hoosier Park under the direction of Lavern Hostetler, winning several races until midway through his four-year-old season when he was claimed and eventually landed at The Meadows. Overall, he has 29 wins in 147 starts with just under $200,000 in purse earnings. His career best time of 1:51.1 was taken last year as a six-year-old at Miami Valley Raceway.