The Indiana Sired Fair Circuit (ISFC) made a stop at the Indiana State Fairgrounds Tuesday, Sept. 7 for action in the second round of the series. A total of 13 races were held for two and three-year-olds with sophomore trotters closing out the card. 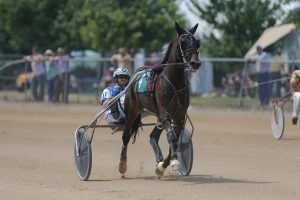 In the 12th race of the day, SJ’s Edith and Jordan Ross earned their first career win in the three-year-old filly division. Starting from the second tier in post nine, SJ’s Edith got away fourth and held her ground as Hi Janet and Jay Cross led the field through fractions of :28.3, 1:00.3 and 1:30. Ross had SJ’s Edith out to challenge at the head of the stretch and trotted home in :29.1 to score the win by a neck over Hi Janet. Midnight Cookie and Kyle Wilfong finished third.

SJ’s Edith stopped the timer in 2:00. She has been knocking on the door all season long with five seconds and three thirds. It was the first career win for the Star Crazed filly, who is leased and trained by Robert Wyman of Shipshewana, Ind. Samuel Miller owns the filly and is the breeder. She competed on the ISFC last year at two also, scoring several seconds and thirds but no wins. She now has more than $13,000 in earnings.

It was the fifth time that Jordan Ross had guided SJ’s Edith. He has yet to finish back of third in the last five starts.

In three-year-old pacing filly action, ER Sheila and Don Eash turned in a gate to wire performance for the win in 1:54.2. Candy It Is finished a length back in second for trainer-driver Alvin Miller. Martha Bigrig and Anthony Yoder finished third.

ER Sheila is owned by Eash Racing Stable. It was the fourth win of the season for the Shadyshark Hanover filly. The mile also marked a new career best for ER Sheila.