Mykindachip, the hard-hitting son of Art’s Chip, earned his second win of 2020 Tuesday, March 3 at Miami Valley Raceway. The 11-year-old gelding moved up late for the win in 1:52.3 with Chris Page at the controls. 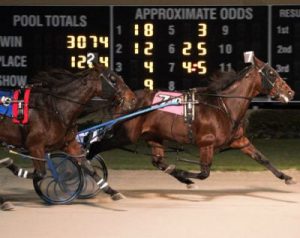 Owned by Burke Racing Stable, J & T Silva Stables, Lawrence Karr and Weaver Bruscemi, Mykindachip started from post eight and was parked in mid pack early on. He made a second move in the middle of the race and moved up in the stretch, sporting broken equipment and nabbed the win by a nose at the wire over Missle J and John DeLong. An upset winner, Mykindachip paid $21.60 to win from the Ron Burke Stable.

Bred by John R. Miller of Topeka, Mykindachip earned his 60th career win in his 232nd career start. He now has $938,000 in career earnings with his career best time taken as an eight-year-old at Harrah’s Hoosier Park in 1:49.1.

Mykindachip comes from a solid family. Out of six foals, five have earned in excess of $191,000 and all five are Indiana sired horses. Most noted in the family outside of Mykindachip is Electric Lad, who had mandatory retirement this past New Year at age 15 and Marks-Mindy, who earned in excess of $350,000 as an Indiana Sires Stakes champion. Mykindachip is the second richest product of sire Art’s Chip and has the quickest career time. American Girl, who earned $1 million last year, is the richest Art’s Chip foal.