Driver Jay Cross scored six wins out of 13 drives on the Monday, Sept. 10 racing program at the Shelby County Fairgrounds. Of the six, two were from his own stable, also giving him a training double out of only two from his barn on the 18-race card. 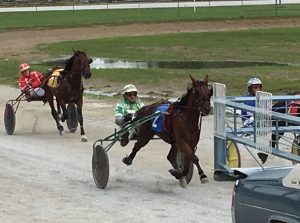 Jay Cross guides Mr Buckaroo out of the gate at Shelbyville. Although Mr Buckaroo was not a winner, Cross had six winners on the card. (Photo by Tammy Knox)

Cross started out the day with a win behind the John Merkel –trained La Fogata in the second of three divisions of the two-year-old pacing fillies. The Tellitlikeitis filly turned in a gate to wire performance, winning by four lengths in 2:05.0 over Misty Shooter and Luke Hanners.

The win for La Fogata was the third in the last four starts. She is owned by Fred Schroeder of Evansville, Ind. and John Vorbeck of Kentucky with Merkel, who is based at the Shelby County Fairgrounds.

The next win for Cross on the card came behind another Shelbyville-based colt as Jesse Popper, trained by Brian Barnes, rallied to a gate to wire win in the first division of two-year-old trotting colts. The Sing Jesse Sing colt completed the mile in 2:06.0, a three and one-half length winner over GD Striker and Gerald Miller. Owned and bred by Benjamin Graber of Woodburn, Ind., it was the second win in a row for Jesse Popper, who earned his personal best time of 1:59.4 in his previous win at Hoosier Park. 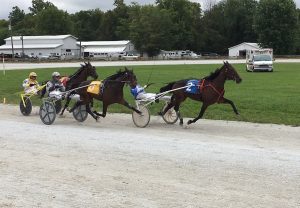 It was also a special day for Jim Wilson and partner Teri Jenkins, who traveled all the way down from Fort Wayne to watch their two-year-old trotting colt Florishing Future win his second straight start. The Guccio gelding, led during the mile and was approached b Geen and Matt Rheinheimer and by Doc’s Swan Song and Don Eash on the extreme outside. The trio finished together across the track, giving the nod to Florishing Future by a head in 2:12.4 over Doc’s Swan Song for second and Geen for third.

Florishing Future was a $6,000 purchase from the Hoosier Classic Yearling Sale last fall by Wilson, who had some experience with that family. Florishing Future is a half brother to Stache, who Wilson used to own. The Andover Hall trotter went on to earn more than $100,000 and a mark of 1:54.4. Rocky Loney drives Florishing Future for Jenkins and Wilson while Donna Loney serves as the trainer.