Six more Indiana sired horses were part of the final day of yearling sales in the Standardbred Horse Sale Thursday, Nov. 5. The sale, moved to the Maryland State Fairgrounds in Timonium, Md., offered two by Rockin Image, two by Swan for All, one by Always a Virgin, and one by JK Endofanera, who was the highest priced one of the group. 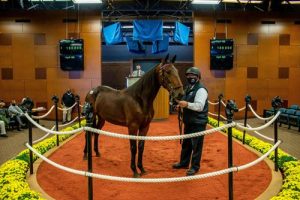 The Standardbred Horse Sale had a different look this year. It was held at the Maryland State Fairgrounds and handlers were equipped with facial coverings while leading horses into the sales ring. Photo by Triscari Video Web and Marketing

Selling as Hip No. 600, Standing on Guard was the highest priced Indiana yearling selling Thursday. Purchased by Brian Brown for $35,000 the JK Endofanera filly is a first foal from the Somebeachsomewhere mare JK You’re So Vain, who has a mark of 1:56.4. She is also a half sister to JK American Beauty, winner of more than $470,000 with a mark of 1:49.4. The fourth dam is the great Tom Pro, multiple divisional and world champion.

The second highest priced Indiana yearling selling Thursday was Hip No. 622 named Aerosmith Hanover. The colt by Rockin Image was purchased by Erv Miller for $32,000. He is the third foal from the dam Asada Hanover a daughter of Dragon Again. Aerosmith Hanover’s second dam is Arts Masterpiece, who earned $1 million and is the dam of $1 million dollar earner Alsace Hanover.

The average sale price for the six Indiana sired yearlings that sold Thursday was $17,167 for a total of $103,000. A total of 12 yearlings from the Indiana program sold over the four-day yearling portion of the Standardbred Sale.