Simply Swan left Harrah’s Hoosier Park nearly a month ago with a win. Now, the four-year-old gelded son of Swan for All has won three in a row at Oak Grove to establish a four-race win streak for the Putnam Stable. His latest win was in a time of 1:54.4. 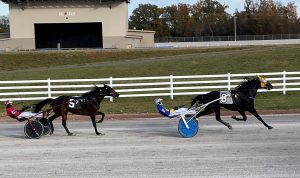 Simply Swan lined up behind the Roy Finn starting gate and left alertly. Showing his dominance throughout he was on top of the field by open lengths heading into the stretch. Annas Lucky Star and Kyle Wilfong were the only ones that could unseat the gelding, but they were unsuccessful to catch Simply Swan, who was a winner by more than a length. Susie’s Sister and Christian Lind finished third.

Simply Swan is owned by JP Racing LLC of Pendleton, Ind. He is now 11 for 48 lifetime and moved his earnings to more than $180,000 with his latest win, which was in the $21,000 Open. Joey Putnam handles the driving for Simply Swan for his dad, Joe, who is the trainer. The Indiana sired gelding was bred by Joe Putnam and Novi Trot. His career best time of 1:53.3 was taken earlier this year at Harrah’s Hoosier Park.

Through the first month of racing at Oak Grove, Joey has won 12 races and nearly $100,000 in earnings, which ranks him third on the list of leading drivers for the track. Christian Lund leads with 17 wins followed by Kyle Wilfong in second with 16.

In the training ranks, Joe Putnam has now scored six wins to be ranked among the track’s top five trainers. Justin Anfinson and Anette Lorentzon lead all trainers with eight wins apiece.