Silent Splendor and Simon Allard had a lot to say about the winner of the $20,000 – $24,000 Claiming event at Harrah’s Philadelphia Sunday, Sept. 18. The duo battled gamely down the stretch to finally get the edge for the win in 1:51.4. 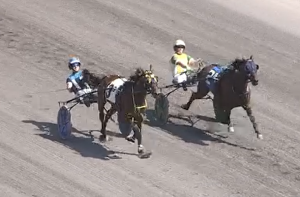 Silent Splendor and Simon Allard fight back on the outside to score the win against Newbie, a fellow Indiana sired opponent for the win at Harrah’s Philadelphia, Sunday, Sept. 18.

Starting from post two, Silent Splendor left with authority but it was R Maddy Blue Chip and Matt Kakaley that crossed over for the lead before the quarter in :26.4. They hadn’t been in long when Silent Splendor then made a circling move to the lead, but as soon as they settled, Newbie and Corey Callahan circled to the lead through the half in :54.0.

Down the backstretch, Silent Splendor moved to the outside and challenged Newbie the entire way around the final turn. In the stretch, it was between those two for the win. One horse would get a head in front but the other would fight back and get a slight edge. In the end, Silent Splendor was able to get the lead to win by a neck over Newbie. Iminurblindspot and Allan Davis finished third.

Both Silent Splendor and Newbie are both Indiana sired products. Silent Splendor is a four-year-old gelded son of Net Ten EOM while Newbie is a 10-year-old son of Always a Virgin. Both horses were claimed out of the race.

Silent Splendor paid $5.60 for the win. He was owned and trained by Dean Eckley of Michigan and bred by John Lengacher Jr. He was claimed by Gilbert Garcia-Herrara, who will also be the new trainer.

Another Indiana winner on the Sunday card was also in claiming action as My Wish Came True and Simon Allard scored the $25,000 – $30,000 claiming event in 1:53.0. The duo moved to the lead after the quarter in :27.3 and never lost his advantage, winning by one length over Coxcomb and Montrell Teague.  What the Luck and Troy Beyer finished third.

My Wish Came True paid $10.00 for the win. He is trained by Jim Doherty Jr. for owner Robert Cacamese of Maryland. Victory Hill Farm bred the four-year-old son of JK Endofanera.

The final Indiana winner on the day conditioned pacing action for fillies and mares. Ooh Real Good and Johnathan Ahle got away in mid pack before closing in late for the win in 1:53.4. Wonder of Love, also an Indiana sired daughter of Shadyshark Hanover, finished second for Simon Allard. Queen Lostris N and George Napolitano Jr. finished third.

Ooh Real Good, a seven-year-old daughter of Real Desire, paid $19.40 for the win. She is owned, trained and bred by William Wiggins of Pennsylvania.