Siblings were victorious on the Wednesday, Sept. 22 racing program at Harrah’s Hoosier Park. Sunafterthestorm was a winner in trotting series action while her older brother, Smile High Jesse, broke his maiden later in the card. 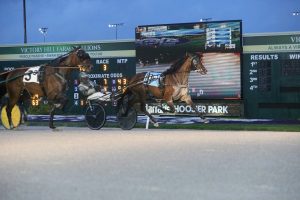 Sunafterthestorm and her older brother, Smile High Jesse, were both winners on the Wednesday, Sept. 22 racing program at Harrah’s Hoosier Park. Photo by Dean Gillette

Starting from the second tier in post 11, Sunafterthestorm and trainer-driver James Yoder had little options out of the gate, so they settled in a spot near the back of the pack as Everlastingfashion and Trace Tetrick set the first quarter mile marker time in :27.3. The tempo abruptly slowed down to the half in :58.2 and three-quarters in 1:28.3, setting the race up for a swift stretch drive.

Sunafterthestorm moved out at the half and was able to flush cover from Swans Eye and John DeLong around the final turn. In the stretch, Sunafterthestorm kicked into a different gear and trotted home in :27.2 for the win, just a neck ahead of Swans Eye. Everlastingfashion finished third.

Sunafterthestorm was a big longshot in the field, paying $40.40 for the win. She is owned by James and Cheyenne Yoder and was bred by Daryl Lehman. It was the second career win for Sunafterthestorm and a new career mark of 1:57.0. She was one of 46 yearlings from the first Indiana crop of Muscle Massive to sell at public auction last fall. She was a $16,000 yearling purchase from the Hoosier Classic Yearling Sale and is a half sister to Smile High Jesse, who was also a winner on the card later in the program.

Smile High Jesse, trained by Dave White, began his journey from post seven for driver Michael Oosting. The Jailhouse Jesse gelding moved out at the half to advance forward and bided his time until the stretch before accelerating.

Smile High Jesse trotted home in :28.2 to earn the win by a neck in 1:59.1. Atemybait and Andy Shetler finished second over April Snow and John DeLong for third.

Smile High Jesse paid $5.60 for the win. The sophomore trotter is owned by Ted Engel and Dave White and was also bred by Daryl Lehman. It was the first career win for Smile High Jesse. He sold for $13,000 as a yearling at the Hoosier Classic Yearling Sale. Both Smile High Jesse and Sunafterthestorm have an unnamed weanling brother who is also by Muscle Massive that will sell at the sales next season.