A showdown between two older Indiana bred claimers will ensue in the second race at Harrah’s Hoosier Park Tuesday, April 9. Southern Swagger, trained by Pete Redder, and King Lil Joe, trained by Andy Shetler, each won their preliminary rounds in the Catholic Cowboy claiming series. They are back to face each other in the $23,000 final. 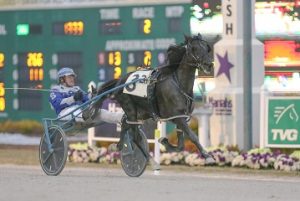 King Lil Joe and trainer-driver Andy Shetler cruise to victory in the preliminary round of the Catholic Cowboy. They return for the final Tuesday, April 9 as the second choice of the field. (Photo by Dean Gillette)

The Catholic Cowboy is one of 10 races on the 11-race card Tuesday in the newly designed Claiming Challenge at Harrah’s Hoosier Park. First post is set at 6:30 p.m.