Shirley Goodness looked to be back on track Wednesday, July 28, winning the fourth leg of the $93,000 Indiana Sires Stakes for three-year-old trotting fillies. The standout two-year-old from 2020 scored the win in 1:54.1 with Driver James Yoder in the bike. 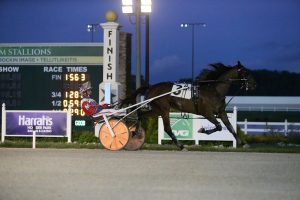 Shirley Goodness, shown with trainer LeWayne Miller from an earlier race this season, brought home a win for the stable in ISS action. The sophomore trotting filly was one of three from the Miller barn who finished one-two-three in the event. Photo by Dean Gillette

Starting from post two, Shirley Goodness was covered up early as Queen of All and Doug Rideout headed out to set the fractions. Dewtiful’s Grace and Verlin Yoder secured the second spot as race favorite Country Girl Charm and LeWayne Miller sat at the back. Fractions of :27.0, :56.1 and 1:25.3 were posted on the board. Shirley Goodness began to move to the outside at the half and inched her way forward to be in contention at the top of the stretch.

Shirley Goodness trotted home in :28.0 to time the wire just right, winning by a neck over Country Girl Charm, who came from the back to finish second. Dewtiful’s Grace and Verlin Yoder maintained ground for third, giving trainer LeWayne Miller a trifecta for the race as all three hail from his barn.

Shirley Goodness, the longest shot of the three Miller horses, paid $20.20 for the win. It was her second win in five starts for 2021. She is owned by Bill Beechy, Bradley Maxwell and Kenneth Frieder. Alan and Larry Troyer bred the daughter of Swan for All. She is closing in on $200,000 in career earnings and the time marks a new career best for the filly.