Due to continued heavy rains in Shelbyville as a result of Tropical Storm Gordon that has blanketed the central Indiana area, the racing program scheduled for the Shelby County Fairgrounds Saturday, Sept. 8 has been canceled and moved to Monday, Sept. 10. Racing will now be held beginning at 11 a.m. at the fairgrounds. Admission and parking is free. 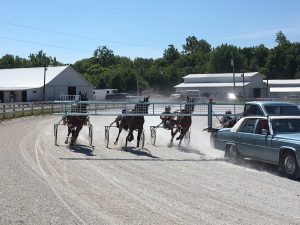 A total of 18 races have been carded, featuring two and three-year-old trotters and pacers. Three divisions of the two-year-old filly pacers will be the first horses on the track at 11 a.m. with a matchup between Miss Fire, trained by Larry King, and Silvershoe Express, trained by Robert Taylor. Both fillies have been consistent all season long with Miss Fire earning five wins and four seconds in 12 outings while Silvershoe Express has four wins in seven starts. Miss Fire begins from post six with Mike Peterson in the bike from the second tier while Silvershoe Express begins from post five with Odell Cross at the controls.

Both Miss Fire and Silvershoe Express will have to compete against Rockinattheryman, who has come on later in the season. The Don Eash owned, trained and driven Rockin Image filly earned her best time to date recently in 1:58.3 at the Indiana State Fairgrounds. She starts from post two.