Trainer Jamie Macomber had a powerhouse in the $15,000 Open Pace Friday, June 19 as Beckhams Z Tam, 2017 Breeders Crown winner and divisional champ in Indiana, was making his first start. However, it was another horse from Macomber’s barn that stole the show. Sharp Action Money and Andy Shetler fended off Beckham’s Z Tam at the finish line to win the event in a time of 1:51.2. 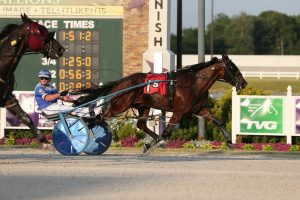 Driver Andy Shelter looks over to see Beckhams Z Tam closing in but it was too late as Sharp Action Money took top honors in the Open Pace at Harrah’s Hoosier Park Friday, June 19 . Photo by Dean Gillette

Starting from post one at odds of 32-1, Sharp Action Money got away well along the inside as Fan of Terror and John Delong sprinted to the lead to set fractions of :28.2, :56.3, and 1:25.0. In the stretch, the field began to fan out for the attack and Sharp Action Money found the room he needed to advance, pacing home in :26 seconds for the win, just a half-length ahead of Beckhams Z Tam and Ricky Macomber. Tellmeaboutit and Michael Oosting moved in late for third.

Owned by OB Stables of Illinois, Sharp Action Money paid out the money to his backers with across the board payouts of $67.40, $11.60 and $5.20. The five-year-old Sportswriter gelding earned his second win of the year in five starts and his 11 trip to the winner’s circle overall. He now has a quarter-million dollars in earnings and his best time of 1:49.3 was taken last year at four at The Meadowlands.

Harrah’s Hoosier Park also saw its first sub 1:50 mile Friday as Island of the Sea, trained by Shane Bowermaster powered home in a division of the “14 Firsts of McCluskey” series in 1:49.3. Driven by Michael Oosting, the Always a Virgin sophomore gelding moved to the lead in the second half of the race and fended off a late challenge by General Doug A and LeWayne Miller, scoring the win by a neck. The Candyman Can and Ricky Macomber finished third.

Island of the Sea, lightly raced last year at two, winning two of his three starts, had one start at The Meadowlands in January, a second-place finish. His mile Friday was a new career best for owners Eric and Lisa Ell of Maryland. Steve Schmucker of New Haven, Ind. is the breeder on Island of the Sea.