The day following Thanksgiving offered an early post filled with series action at Harrah’s Hoosier Park. One of those series was for two-year-old pacing fillies with Shakeanera and Ricky Macomber Jr. bringing home the title. 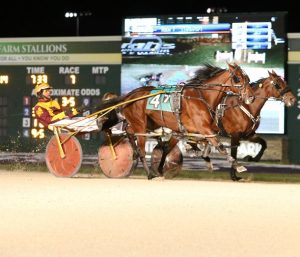 Shakeanera and Ricky Macomber Jr. rallied past Odds On Number One in the McNulty Series Friday, Nov. 26 at Harrah’s Hoosier Park. Photo by Dean Gillette

Shakeanera paid $5.60 for the win. The JK Endofanera filly is owned by Robert Laffoon, Myron Gerth and Vickie Owens. Laffoon trains the filly bred by Orla Bontrager. It was the third win of the season for Shakeanera, who earned a career best time of 1:54.0 earlier this year. She is now approaching $50,000 in career earnings.

Earlier in the night, Little Rocket Man scored another victory in the $22,000 Open Handicap. The five-year-old gelding was parked on the outside behind traffic at the quarter in :26.3 and after finding a resting place at the half in :55.1, he was back out toward the lead at the three-quarters in 1:23.3. In the stretch, Little Rocket Man did what he does best, rolled down the lane with authority for driver John DeLong in :26.4, earning the win in 1:50.2 by a half-length. Mac’s Big Boy and Trace Tetrick finished second over Ana Afreet N and Sam Widger for third.

Trained by Missy Essig, Little Rocket Man is owned by Russell Beeman and Jack Freeman. The Rockin Image gelding now has 15 wins in 2021 out of 25 starts. His earnings now total nearly $550,000.