Indiana sired Shady’s Shark Bait took a new lifetime mark in the first race at Dover Downs Monday, Feb. 17. The four-year-old son of Shadyshark Hanover stopped the timer in 1:52.1 for the win. 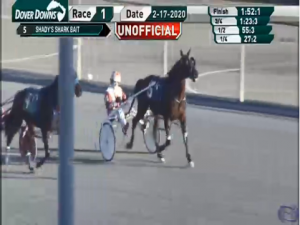 Shady’s Shark Bait and George Napolitano Jr. make their way back to the winner’s circle Monday, Feb. 17 after recording a new lifetime mark.

Guided by George Napolitano Jr., Shady’s Shark Bait showed little speed at the start of the conditioned pace and followed along in mid pack. Around the final turn, the gelding was able to move sideways from the inside pylons all the way over to the four-path for a clean sprint home, just getting up for the win by a neck over Mr Irresistible and Tim Tetrick. A bit of a surprise to bettors, Shady’s Shark Bait paid $10.80 to win.

Owned by Legacy Racing of DE, Inc., Shady’s Shark Bait is trained by Wayne Givens. He was bred in Indiana by TKO Racing Stable LLC. Originally campaigned by Trainer Charles Stewart, he was sold to his current owners last May and has stayed exclusively on the Delaware-Maryland circuit. The win Monday was his sixth career trip to the winner’s circle and he now has in excess of $42,000 in earnings. His dam, Miss Grady White, is a 100 percent producer. She has a two-year-old, Speakerofdahouse, that is by Well Said and is a two-year-old in 2020.