Sgtshirleyssweetie, a four-year-old daughter of Riggins named after breeder Lucy Shirley, was a gate to wire winner at Harrington Raceway Tuesday, May 11 in a $7,500 conditioned pace. The mare covered the one-mile distance in a time of 1:58.4. 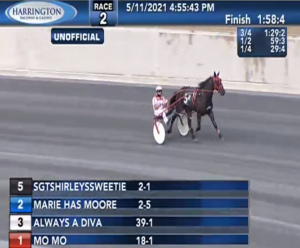 Sgtshirleyssweetie scored her second win for her new connections at Harrington Raceway Tuesday, May 11.

Sgtshirleyssweetie, driven by Allan Davis, competed on the Indiana Sired Fair Circuit at two and three under the direction of Jeff Dever. The filly made a few starts at Harrah’s Hoosier Park last fall before being acquired by Dan Munson, who also trains the filly. Sgtshirleyssweetie took a new career best mark in late March at Dover Downs in 1:55.2. The win at Harrington marks her second for Munson for 2021. She has now amassed over $31,000 in career earnings.

Sgtshirleyssweetie paid $6.20 for the win. She was a length winner over Marie Has Moore and Russell Foster followed by Always A Diva, another Indiana sired mare by Always a Virgin driven by Pat Berry.

In the very next race at Harrington, it was Indiana sired Dancingthebigmove and Montrell Teague for the win. The five-year-old daughter of Shadyshark Hanover got away in the two-hold where she rode the entire mile behind Peaks Cruiser and Art Stafford Jr. Teague got Dancingthebigmove out late in the race and scored the win by a nose in a major upset over Peaks Cruiser, Remy Aurora and Allan Davis finished third.

Dancingthebigmove paid $61.20 for the win. She is owned by Ronald Short and Jeff Beauchamp of Delaware. Jake Schwartz is the breeder on the mare, who now has three wins in 2021. Her career best time of 1:56.3 was taken in her win Tuesday at Harrington.