Several Indiana horsemen and horsewomen recently scored firsts in their harness racing careers. According to the November issue of “Hoof Beats,” four individuals were included on the “First Wins” column in the magazine. 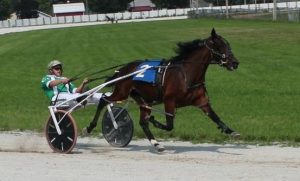 Carson Conrad is shown driving Zig Zag Zoom earlier this year on the ISFC. He scored his first driving win with the filly at Connersville. Photo by Dean Gillette

Carson Conrad earned his first career driving win Saturday, Sept. 11 at the Fayette County Fairgrounds behind Zig Zag Zoom. The JK Endofanera filly, co-owned by Carson, was a winner in Indiana Sired Fair Circuit action and the mile was a new lifetime mark of 2:02.1.

Another driving first was recorded by Krista Harmon, who drove Poof Daddy to victory at the Montpelier, Ohio fair. The six-year-old pacing gelding by Woodstock has nine wins this season and 18 overall with more than $85,000 in earnings. The race was part of the Ohio Lady Driving Series. Krista also trains Poof Daddy, who she owns and was co-breeder on.

Also on the list was Charles Groen, who earned his first training victory at Harrah’s Hoosier Park Sept. 25. Groen sent out Heartland Revenue for the win. Owned by Groen and Team Teusink Racing of Michigan, the Always a Virgin seven-year-old gelding was driven by Brandon Bates in the win.

Kevin Slabaugh also recorded his first training victory at Harrah’s Hoosier Park. Sunshine Queen scored a win on the Sept. 23 racing program. The Sunshine Beach mare is owned by Sylvia Sedlak of Northfield, Ohio and was driven by LeWayne Miller. The mile was recorded in 1:55.3, a new career best time.

Another first not on the list was recorded by Clint Coy at Harrah’s Hoosier Park. Clint earned his first pari-mutuel driving win Nov. 2 at Dayton Raceway. He guided Vel Gorgeous Sammy to victory for trainer Kevin High. The win was recorded with the He’s Gorgeous gelding in a time of 1:56.4 by a nose over Charley Bravo and Trevor Smith.