A total of 150 horses and stallion shares sold at the annual 2019 Tattersalls January Select Mixed Sale Monday, Jan. 21 held at The Meadowlands. Among those sold were several Indiana sired entrants with Martini Show topping the Indiana horses with a sale price of $85,000. 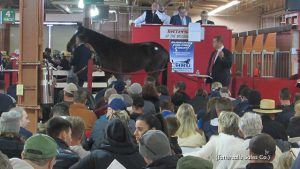 Several Indiana sired horses were offered at auction during the annual Tattersalls January Mixed Sale at The Meadowlands. (Photo by Tattersalls Sales Company)

A son of Swan For All, Martini Show was the first Indiana sired horse into the ring. The three-year-old colt, wearing Hip No. 75, sold for $85,000 to Tom Pollack of Venetia, Pa. Martini Show raced at Hoosier Park this past season under the conditioning of trainer Staffan Lind and finished third in the $220,000 Indiana Sires Stakes Super Final, his last start before the sale.

A few hip numbers later was Swan Motion, also a daughter of Swan For All, who brought $18,000 and was purchased by George Beck of Freehold, NJ. Swan Motion also raced at Hoosier Park this past season for Lind.

Partyon Partygirl was the sole Indiana sired pacer to sell, bringing $10,000. The Always A Virgin mare will join the barn of Nick Surick of Jackson, NJ. Now four, Partyon Partygirl started out at Hoosier Park before venturing to the East Coast where she has been racing for the past two years.