According to a social media post by trainer John DeLong, Seventimesavirgin, the iron horse from his stable, has been retired. The now six-year-old mare completes her fantastic career with 32 wins in 86 starts and more than $709,000 in earnings. 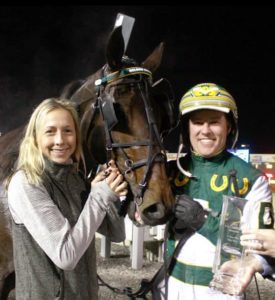 John DeLong and Tabby Canarr stop for a photo with Seventimesavirgin after one of her many Indiana Sires Stakes wins at Harrah’s Hoosier Park. Photo by Dean Gillette

Seventimesavirgin, who was trained and driven almost her entire career by DeLong, started off as a two-year-old winning five of her 12 starts but it was her three-year-old season when she began to dominate. The 2016 Three-Year-Old Pacing Filly of the Year in Indiana, Seventimesavirgin won 13 of 15 starts that year, including a nine-race win streak. The daughter of Always a Virgin picked up her career best record at four in 1:49.4. She even competed in Breeders Crown action as an older pacer. Her last start was recorded on Hoosier Champions Night at Harrah’s Hoosier Park in the Indiana Sires Stakes final for older pacing mares Oct. 11, 2019.

A homebred by owner Jesse DeLong of Clinton, Wis., Seventimesavirgin was the first foal from Mrs. Grant Seven, an Illinois bred daughter of Sportsmaster who earned a record of 1:53.2 and more than $131,000. According to DeLong’s post, Jesse DeLong wanted a Sportsmaster mare to breed to Always A Virgin and bought Mrs. Grant Seven for $350 to give her a new lease on life. In addition to Seventimesavirgin, Mrs. Grant Seven has a two-year-old this year, also by Always A Virgin, Seventimesacharm, who has held her own on the Indiana Sires Stakes circuit this season, earning a record of 1:51.1 and earnings just under the $100,000 mark.

DeLong, who is also a director of the Indiana Standardbred Association, noted that Seventimesavirgin is already back at the family farm in Wisconsin in preparation for the next phase of her career as a brood mare. Seventimesacharm will move into her older sister’s stall moving forward during her racing career.

Both DeLong and his fiancé, Tabby Canarr, have a special bond with Seventimesavirgin and will no doubt be waiting for the first foal of Seventimesavirgin to be part of their stable once again when her foals become racing age.