Seventimesavirgin, the standout Indiana sired pacing mare and former divisional champion, made her first appearance on the track Wednesday, April 17 at Harrah’s Hoosier Park. Now six-years-old, the Always A Virgin mare won her qualifier by 14 lengths in a time of 1:53.4 to prepare for the 2019 racing season. 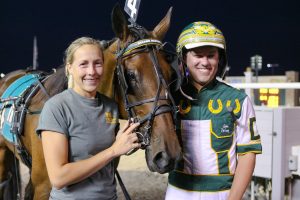 Seventimesavirgin, pictured with Tabby Canarr and John DeLong, won her qualifier by 14 lengths in preparation for the 2019 racing season. (Photo by Dean Gillette)

Always trained by John DeLong, who campaigned her through her younger years, Seventimesavirgin went to the East Coast last year under the guidance of trainer Jimmy Nickerson and even competed in the Breeders Crown eliminations. Her last start was in December at The Meadowlands in a conditioned class.

Seventimesavirgin has 28 career wins in 68 career starts. She has been skillfully cared for in the DeLong barn by Tabby Canarr.

The DeLong Stable has double reason to be excited for the 2019 racing season. Seventimesavirgin has a full sister that is a two-year-old in 2019 named Seventimesacharm, who is also owned by Jesse Delong.