Seven qualifiers will kick off action at Harrah’s Hoosier Park for the 2021 racing season Wednesday, March 9. The qualifiers mark the first time the starting gate will be on the track this year in preparation for opening night set for Friday, March 26. 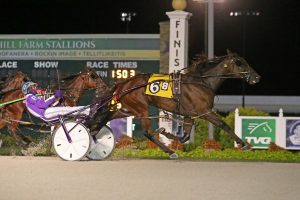 Crook Boyzz and Brandon Bates are shown winning a division of Indiana Sires Stakes action last fall. They will compete in the first round of qualifiers Wednesday, March 9. Photo by Dean Gillette

The very first race will feature a star from last year as Crook Boyzz takes the track. The four-year-old son of Always a Virgin had two starts earlier this year at Miami Valley before taking a break and regrouping for the upcoming Indiana racing season.

Crook Boyzz completed last year’s campaign with six wins in 16 starts and only four of those were off the board. In all, he garnered nearly $150,000 in earnings and took a new career mark of 1:50.0. Crook Boyzz reunites with driver Brandon Bates from post five. Brett Selby trains the gelding, who is owned by Joh Esposito, Robert Esposito and Selby. Wilbur Lengacher bred the Indiana bred pacer.

In the trotting ranks, the third race will feature the return of Ohio champion Two O B Wonkenobi.  Owned by Shara Weaver and Madeline Roche, the six-year-old son of Dejarmbro makes his 2021 debut from post seven with trainer-driver LeWayne Miller at the controls. Two O B Wonkenobi has 18 career wins in 53 career starts with earnings over the $350,000. His career best time was taken at four at Harrah’s Hoosier Park in a time of 1:52.0. Pond-A-Acres of New Haven, Ind. bred the for Ohio Sires Stakes champ.

Four more sets of qualifiers will be held leading up to the season opener. Held each Wednesday and Saturday, the qualifiers on Wednesday, March 24 will be held in the evening and will serve as a dress rehearsal for the operations of pari-mutuel racing at Harrah’s Hoosier Park.