The first round of Breeders Crown eliminations was held Friday, Oct. 23 at Harrah’s Hoosier Park. Of the 12 eliminations for two and three-year-olds on both gaits, nine entrants were Indiana sired. At the end of the night, seven will advance to the $6 million Breeders Crown Championships set for Friday, Oct. 30 and Saturday. Oct. 31 at Harrah’s Hoosier Park. 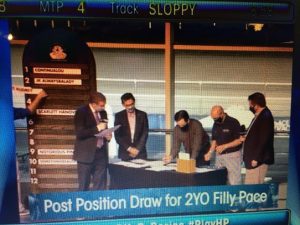 Officials from both Harrah’s Hoosier Park and the Hambletonian Society conduct one of the draws between races Friday, Oct. 23 for the Breeders Crown Championships following the elimination rounds.

The biggest mile of the night was turned in by two-year-old trotting colt Brookview Bolt, driven by David Miller. The freshman son of Swan for All got away in third as Cuatro De Julio and Louis Baudron set fractions of :26.3, :56.2 and 1:26.4 before Brookview Bolt got the nod to move out to challenge. Trotting home in :26.4, Brookview Bolt was just a neck back at the finish for the win behind In Range and Tim Tetrick in a time of 1:54.1. Delayed Hanover and Yannick Gingras finished third.

Trained by Ron Burke, Brookview Bolt is owned by Burke Racing, Knox Services, J & T Silva-Purnel & Libby, and Weaver Bruscemi. Bred by Brookview Farms, Brookview Bolt heads to the final not finishing worse than third in his last seven starts. His time in the elimination marks a new personal best as he seeks the Breeders Crown title for two-year-old trotting colts and geldings.

Joining Brookview Bolt with a big effort on Breeders Crown Elimination Night was two-year-old trotting filly Swift Swanda, with Trace Tetrick at the controls. The Swan for All filly followed along as May Karp and Dexter Dunn established the tempo at :27.3, :57.4 and 1:26.4 before feeling pressure from the late closers.

Swift Swanda was one of those late closers moving in, trotting home in :26.2 for a great closing finish for third behind Lady Chaos (David Miller) and Presto (Yannick Gingras) in a time of 1:54.2. Swift Swanda was only a length back on the outside for the win.

Trained by Erv Miller, Swift Swanda is owned by Anthony Lombardi and The Kales Company. She was a winner in the $270,000 Indiana Sires Stakes Super Final prior to her third-place finish in the Breeders Crown elimination. Overall, she has won six of her 11 career starts. She was bred by Lavon Miller, and her time in the elimination also marked a career best trip.

Other Indiana sired qualifiers for the Breeders Crown Championships included JK Going West in the two-year-old pacing colts and geldings division. The JK Endofanera gelding paced home in :26.1 to finish third in a recorded time of 1:51.4 for trainer-driver LeWayne Miller. Two-year-old pacing filly Somethingbeautiful, driven by Tim Tetrick, also qualified with a fifth-place finish. The Always A Virgin filly trained by Dylan Davis, got a little rough late in the stretch and eventually went off stride, but still qualified for the final with a time of 1:52.4 to finish fifth.

One of the biggest surprises of the night was Ima Diamond Babe, who was 83-1. The Guccio filly trained and driven by James Yoder has only one career win and finished fourth in the Indiana Sires Stakes Super Final prior to the elimination, but the two-year-old filly really stepped up, closing to finish fifth in a time of 1:55.2 to advance to the championship round.

Yoder will be busy on Breeders Crown Championship weekend as three-year-old trotting filly May Baby also qualified with a fifth-place finish. The Guccio filly followed Rock Swan and Trace Tetrick through the second half of the race. Both Indiana sired fillies trotted home well, with Rock Swan finishing fourth in 1:53.2 and May Baby right behind her in fifth in 1:53.3 to advance to the final. Rock Swan, two-year-old trotting filly of the year last season in Indiana, hails from the Erv Miller barn for Indiana owners S & R Racing of Fishers, Ind. and Anthony Lombardi of Illinois.

Four of the draws for the championships were held between races Friday, determining the final fields for the Open Mares Trot, Two-Year-Old Colt & Gelding Trot, and Two-Year-Old Pace for both colts and geldings and fillies. The remainder of the draws will be held during the Saturday, Oct. 24 racing program and prior to the Indiana Horse Racing Association Hall of Fame banquet in the Clubhouse Monday, Oct. 26.