A total of seven candidates have entered the election for Indiana Standardbred Association (ISA) Director At Large for this fall. Candidates were recently compiled by the ISA Nominating Committee. Five positions will be filled for the At Large position. 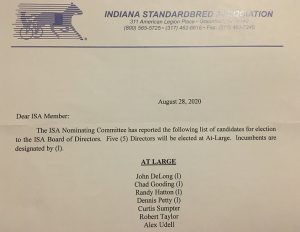 The ISA recently mailed out the list of candidates for the upcoming election. A total of five directors will be elected for the At-Large position.

Those on the list for ISA Director At Large include John DeLong, Chad Gooding, Randy Hatton, Dennis Petty, Curtis Sumpter, Robert Taylor and Alex Udell. DeLong, Gooding, Hatton and Petty are all currently serving the ISA as an At-Large Director. The term will be for three years with the ISA. The term begins Jan. 1, 2021.

Additional nominations for director are now being accepted by the ISA. A nomination form must be accompanied by a petition in support signed by at least 50 paid members of the Association to be eligible. Nominations must be accepted at the ISA Office 21 days from the notice to ISA members, which was Aug. 28, making the deadline Friday, Sept. 18. Nominations should be mailed to the ISA Office at: 311 American Legion Place, Greenfield, IN, 46140.