It’s hard for any horse to stay on top of his game, but for Secret Threat, he has proven year after year to fare well in the high dollar claiming ranks. The 10-year-old stallion is now a member of an elite club as he surpassed a half million in earnings Friday, May 6 at Harrah’s Hoosier Park. 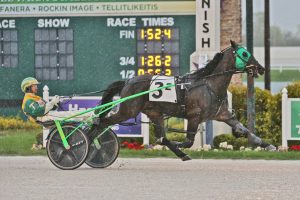 Secret Threat and Trace Tetrick topped a half million dollars in their win at Harrah’s Hoosier Park Friday, May 6, 2022. Photo by Dean Gillette

Driven by Trace Tetrick for trainer Tyler George, Secret Threat went straight to the lead from the start and held the $65-$75,000 claimers at bay early on, passing the quarter in :26.1. General Dolan and Michael Oosting were persistent in their pursuit of the top spot, taking over by the half in :56.2. Secret Threat continued to follow along past the three-quarters in 1:26.2. In the stretch, Secret Threat moved out and paced home in :26 seconds to score the win by a length over General Dolan, also trained by George. Major Leaguer and Jimmy Whittemore finished third.

Secret Threat is owned by Justin Lloyd and George. The Palone Ranger horse was bred by Larry and Kim Owen of Anderson, Ind. During his career, he has had 46 career wins in 178 career starts with his career best time taken last year at nine in 1:48.4.

Secret Threat has been with his current ownership connections for the past two years, however, he has been associated with Lloyd, who served as his trainer prior to George, since his career started on the Indiana Sired Fair Circuit as a two-year-old. He won four of his first six races on the ISFC and went on to win the ISFC State Championship as a freshman. He advanced to the pari-mutuel ranks as a sophomore and competed in Indiana Sires Stakes action before shipping to Yonkers for a brief stint and then returning to the Midwest.

Driven by Brett Miller, Sectionaline Bigry is owned by Harold Bauder and trained by Steve Bauder. The Bauder family bred the Pet Rock seven-year-old gelding, who earned his eighth win of 2022 and his 39th overall. He now has more than $820,000 in career earnings for the Bauders.