The second session of the Indiana Sires Fair Circuit (ISFC) got underway Wednesday, Aug. 18 at the Converse Fairgrounds. A total of 17 races were showcased with several new names recorded as winners in the series. 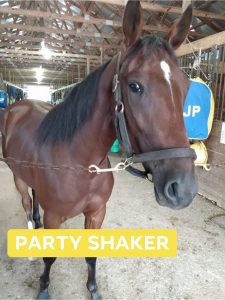 Party Shaker kicked off the second session of the Indiana Sired Fair Circuit Wednesday, Aug. 18 at Converse. It was one of two wins on the card by Driver Joey Putnam and Trainer Joe Putnam. Photo by Putnam Racing & Shipping

Kicking off the day was a win by Party Shaker, making her first start on the ISFC. The Tellitlikeitis two-year-old filly got away third for driver Joey Putnam as Marla’s Got Legs and Clint Coy set the first quarter in :31.2. Putnam moved Party Shaker out and around to the lead by the half in 1:02.3 and continued to open up at every pole, winning by seven lengths in a time of 2:02.2, a final quarter in :29.4. Marla’s Got Legs finished second over Latest Kiss and Matt Rheinheimer for third.

Party Shaker is owned by J P Racing LLC and Michael Lee. She tried her luck earlier this season at Harrah’s Hoosier Park winning a race in 1:55.2. She is now two for five and has only finished back of third once in those starts. Joe Putnam trains the freshman filly, who was bred by Darin and Matthew Miller.

Team Putnam also connected for a second win on the card in the third and final division of the two-year-old filly pacers. Heidis Image and Joey Putnam used different strategy than her stablemate and went to the rail in mid pack as Al Perfection and Clay Craib set fractions of :31.2 and 1:04.0. Heading to the three-quarter mile marker, a second row began to form and Heidis Image was part of that flow, moving three and four wide around opponents to get into position for the stretch drive.

Heidis Image is owned by Phil Brummel and Gone Coastal Farms of Michigan. Willis Schwartz bred the Rockin Image filly who earned her second career win in five starts. Her best time was taken at Harrah’s Hoosier Park in 1:54.4. The start at Converse was also her first on the ISFC.

The day also included the return of Dover Dance from the Greg Runyon Stable. The Dover Dan filly took the ISFC by storm during the first month of action, winning all six of her starts before being sidelined. She returned Wednesday just like her previous form, a gate to wire effort for the win in 2:08.0. Jay Cross was in the bike for the race. Dover Dance was two lengths ahead of Incredable Star and Chad Clark in second. Our Miss Sweettab and Lester Raber finished third.

The ISFC moves to the Shelby County Fairgrounds for it’s next stop Tuesday, Aug. 24.