Horsemen have long headed for the lush grounds of Pinehurst Training Center in Pinehurst, N.C. for winter training. Numerous champions have conditioned at the 111-acre facility and Indiana native Scott Freeman will now be part of that historic tradition. Freeman has been named the new Track Superintendent for the facility. 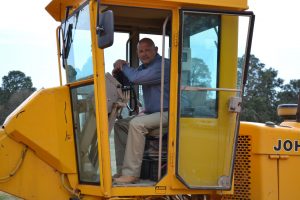 Freeman, a native of Allegan, Mich., grew up around the Hartford City, Ind. area. He first started in racing on the Trottingbred Pony circuit with his father, Jack, who passed away in 2013. Freeman began driving Standardbreds in the early 1990’s and was part of the backstretch when Hoosier Park opened in 1994. The Freemans were most noted for their horse, Indianapolis Colt, in the early days of pari-mutuel racing at Hoosier Park. The horse was a hit with fans in Central Indiana due to his name. They also campaigned horses such as BF Nuclear Boy, Noble Gill, Maysanna and Bombs A Flying. In all, Freeman has trained, raced, owned and bred Standardbreds in Indiana for the past 20 years.

Freeman has always been eager to assist in other areas of racing and helped out with various racing-related publicity appearances. In addition, Freeman took an interest in track surfaces and worked on the track maintenance crew and backstretch maintenance crews at Hoosier Park. In recent year, he and his wife, Carla, have lived in Chesterfield, Ind. with their twin boys Cole and Cody.

Freeman’s first big task as the new track superintendent at Pinehurst Training Center will be the upcoming Spring Matinee, which is set for Saturday, April 6. The track also hosts an annual Independence Day celebration July 3 featuring concerts and fireworks at the facility.