Cumberland Raceway recently started their 2021 racing season and Indiana sired Sarah’s Lilly is now two for two at the facility in Maine. Driven by Bruce Ranger, the five-year-old mare has recorded both of her wins in the Winner’s Over for Fillies and Mares. 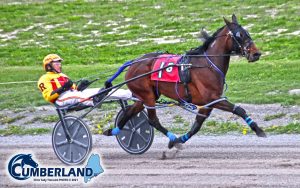 Sarah’s Lilly went straight to the lead in her race Tuesday, May 18 and never looked back, posting fractions of :27.3, :58.1 and 1:27.0. The He’s Gorgeous mare pulled away from the field in the stretch to win by three and three-quarter lengths in 1:56.0.

Sarah’s Lilly is now owned by Mo Coo Inc. of Merrick, New York. She is trained by Benson Merrill and has four wins in 12 starts this season. Her career best time was taken as a four-year-old last year at Plainridge in a time of 1:53.4. She is now 16 for 68 in her career with earnings nearing $75,000.

Sarah’s Lilly, bred by Irwin Kaplan of Merrick, New York, is now back with her breeder as part of his stable, Mo Coo Inc.  She spent her two and three-year-old season on the Indiana Sired Fair Circuit under the direction of trainer Larry King for Funk Racing Stable and King Racing Stable until she was sold back to Kaplan a year ago in March.