Royal Rocks, the four-year-old Indiana sired gelding owned and trained by Charlie Stewart, was one of two wins on the card for Stewart. A native of Anderson, Ind., Stewart also scored a win with Venom on the Saturday, Feb. 6 racing program at Miami Valley Raceway. 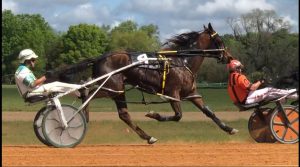 A son of Rockin Image, Royal Rocks was able to slide over to the rail and follow along in third for driver Tyler Smith as Livin Lovin Prayin and Sam Widger set the tempo through fractions of :27.1, 56.1 and 1:24.4. Around the final turn, Royal Rocks flipped three-wide to get in position for the stretch drive and was able to scoot home in :29.2 for the win by a neck over Livin Lovin Prayin. Skyway Artimus, also Indiana sired (Net Ten EOM), finished third for Brett Miller.

Bred by Victory Hill Farm, Royal Rocks was a longshot in the race, paying $43.80 to win. It was the first start of 2021 for Royal Rocks, who took a new career best time of 1:52.1 last summer at Harrah’s Hoosier Park.  The full brother to Little Rocket Man was purchased by Stewart from the Midwest Mixed Sale in late November for $10,500. It was his second start under Stewart, who raced him one time in December 2020.

Stewart’s other winner on the night was Venom, driven by John DeLong. Venom was able to follow cover up to the leaders after the half in :56.4 before securing the top spot. Horses fanned out three-wide around the final turn in an attempt to challenge, but Venom was too strong, holding on for the win by a half-length with broken equipment as he went across the wire. Franky’s Beach Boy and Trevor Smith finished second followed by Sprinter N and Chris Page for third. The time of the mile was 1:54.0.

Venom was also a longshot, paying $10.20 for the win. The six-year-old son of Rock N Roll Heaven is owned by Jack Freeman. His career best time of 1:49.3 was taken last year and his earnings are now over $128,000. Venom was claimed out of the race by Adam Short.

Earlier in the night GD Western Joe and Chris Page were winners again in the featured $20,000 Open Pace. The gate to wire winner scored the victory in 1:53.2. The Real Desire six-year-old, trained by Ron Burke, has now won three of four starts in 2021.