It was a long trip but it was well worth it for catch driver Jordan Ross. The Covington, Tenn. driver, who just turned 24-years-old last week, won three races on the 11-race program at the Harrison County Fairground, caught a loose horse, and returned to Harrah’s Hoosier Park for the 12th race to complete a full day of harness racing. 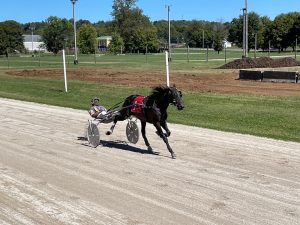 Ross has built up a nice business on the Indiana Sired Fair Circuit and has become a sought-after driver. His day began behind the talented freshman filly from the John Merkel barn, Goldies Rockin. Moving to the lead at the half and parked until the final turn, Goldies Rockin cleared the field and rallied hoe in :29.2 over a damp track for the win in 2:05.2. Mystical Image and Jacob Fox finished second over Vel Ya Want To and Clay Craib, who recovered from a break after the start for third.

Goldies Rockin, a daughter of Rockin Image, is owned by Merkel and John Vorbeck. Jason Schwartz bred the freshman filly.

Ross returned to the winner’s circle in a division of the two-year-old colt and gelding trot with a gate to wire effort from Molly’s Jail in 2:10.4. William Wagler owns, trains and bred the Bluto filly, whose older sister, Molly’s Joan, competed later in the day for Wagler.

Ross’ day was completed in the final race with a similar trip behind Pilgrims Image in the three-year-old colt and gelding trot, a win by two and three-quarter lengths in 2:04.4. Vel Jesse and Clay Craib, who had two wins on the card, finished second. Virgnes Kenny B and Jack Kieninger Jr finished third.

Pilgrims Image is owned and trained by Lester Raber, who had three training wins on the day.

In addition to winning three, Ross put his expertise to work in the 10th race, the three-year-old trotting filly division. Heading down the backstretch for the second time, driver Ryan Raber was unseated from J-S Siesta Tan, who continued to follow the field. Ross was driving Molly’s Joan and finished third behind the Lester Raber-trained Midnight Cookie, driven by Doug Rideout with Don Eash and Swanful Grace finishing second. After the wire, Ross eased up with Molly’s Joan and moved to the outside, allowing J-S Siesta Tan to move up beside him. He was about to reach out and grab the filly’s line with his left hand and stopped by fillies in about the same place Raber was unseated. Raber was able to climb back aboard and drive J-S Siesta Tan back to the barn thanks to the efforts of Ross.