Rose Run Vision and Trevor Smith scored a win in the afternoon feature Tuesday, Feb. 15 at Miami Valley Raceway. The Indiana sired mare was successful in the $30,000 Fillies and Mares Open Pace. 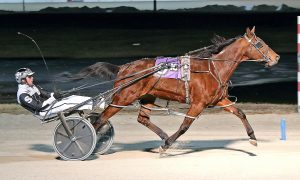 Rose Run Vision and Trevor Smith scored a mild upset in a near gate to wire effort in the featured Fillies and Mares Open Pace Tuesday, Feb. 15 at Miami Valley Raceway. Photo by Conrad Photography

Starting from post nine, which was assigned to her in the nine-horse field, Rose Run Vision had to work at it to get to the lead, scoring the top spot after the quarter in :27.2. From there, she controlled the pace, setting fractions of :57.0 and 1:24.4 while feeling the pressure from the outside challengers.

In the stretch, Rose Run Vision held strong, pacing home in :28.2 for the win in 1:53.1. Paperback Thriller and Dan Noble finished one and one-half lengths back in second followed by Marloe Hanover and Brett Miller for the show spot.

Rose Run Vision paid $11.80 for the win. The five-year-old Time to Roll mare is trained by Don Eash and owned by his Eash Racing Stable Inc. Rose Run Farm bred the mare, who is now three for five in 2022. Overall, Rose Run Vision is 22 for 81 with more than $239,000 in career earnings. Her career best time was taken last year at four at Harrah’s Hoosier Park in 1:50.0.

Eash purchased Rose Run Vision from the first crop of Time to Roll from the Hoosier Classic Yearling Sale. The mare brought $18,000 through the ring, and she was among the top 10 sellers for the stallion. Rose Run Vision is the next to last foal from the All American Native mare A and G’s Finest, who was unraced. The mare is a 100 percent producer with all five of her foals $100,000-plus earners.

Rose Run Vision and her half-brother, Rose Run Uriah, are the quickest sharing their best times of 1:50.0. The family has a two-year-old sibling this year from the first crop of Check Six named Martz Renee. The filly sold at the Hoosier Classic Yearling Sale for $34,000 last fall under the name Martz Urene. Eash also bought the filly. She was one of 44 sold from the first crop of Check Six.