It was a fight to the finish with mares across the track in the $22,000 Fillies and Mares Open Handicap Saturday, July 3 at Harrah’s Hoosier Park. Two lengths separated the top six finishers with Rose Run Vision and Ricky Macomber Jr. getting the edge along the inside for the win in 1:50.0. 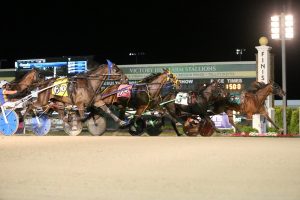 The top six finishers were together across the track in the Open Pace for Mares with Rose Run Vision (No. 4) getting the edge on the inside. Photo by Dean Gillette

Mystical Carrie and Trace Tetrick rolled out of the gate to get the top spot and lead the way through fractions of :26.2, :54.4 and 1:23.0. In the stretch, the field fanned out across the track for the stretch drive and mares kicked into top gear to try to get the title. Rose Run Vision, who had sat in the two-hole most of the way, was able to find room to get out and surge forward for the win by one-half length. Mystical Carrie finished second over Grace Rocks and Michael Oosting for third.

Rose Run Vision paid $31.40 for the win. The Time to Roll four-year-old mare is owned by Eash Racing Stable and trained by Don Eash. She now has 15 career wins in 61 career starts and her latest effort marked a new career best time. Rose Run Vision has been consistent this year, finishing in the top three 14 of 20 starts. She paced under the 1:50 time barrier earlier this year at Harrah’s Hoosier Park. She now has more than $127,000 in earnings.

Earlier in the evening, Little Rocket Man and John DeLong visited the winner’s circle again in the Open Pace. Starting from post seen, Little Rocket Man floated to the back of the pack as Colossal Stride A and Brandon Bates set the fractions of :25.4, :52.2 and 1:20.1.

In the stretch, Little Rocket Man got geared up to close in for the win, getting the victory by three and one-quarter lengths in 1:48.3. Family Recipe and LeWayne Miller finished second over Tellmeaboutit and Michael Oosting for third, completing the Indiana sired top three finishers.

Owned by Russ Beeman and Jack Freeman, Little Rocket Man earned his 26th win in 41 career starts. He is now nine for 12 in 2021 and pushed his earnings over the $385,000 mark. Missy Essig trains the standout son of Rockin Image.