Rose Run Uriah, former Indiana Sires Stakes contender, scored a big win at Dover Downs Thursday, Jan. 6, 2022. The Jereme’s Jet gelding dug in gamely to beat heavily favored Island of the Sea for the win in 1:50.0 in the Open Pace. 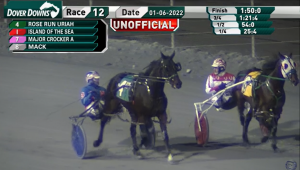 Starting from post four, Rose Run Uriah was actually beat out of the gate as Betterthanthebeach and Allan Davis got the top spot early on from the outside. However, driver Pat Berry was able to place Rose Run Uriah ahead of the rest of the field and passed up Betterthanthebeach on the inside at the quarter in :25.4. It wasn’t long before Island of the Sea and Tim Tetrick moved out and onto the lead at the half in :54.0. Down the backstretch, a second tier began to form but Berry kept Rose Run Uriah securely in second along the inside.

Around the final turn, the outer flow of traffic began to stall, giving Rose Run Uriah the opportunity to move out for the challenge. With a final panel in :27.4, Rose Run Uriah used the entire stretch and got up in the final stride for the win by a neck over Island of the Sea. Major Crocker A and Montrell Teague closed in gamely from the outside for third.

Rose Run Uriah paid $19.20 for the win. The six-year-old gelding is owned and trained by A. Bobby Glassmeyer of Delaware. Rose Run Farm bred the veteran pacer equaled his career best time in the race, an impressive feat during a blistering cold night in Delaware. He now has 19 wins in 108 career starts with more than $240,000 in earnings. His prior best time was 1:50 taken at Harrah’s Hoosier Park last season. He was claimed two weeks in a row, eventually landing in the hands of Glassmeyer.

Rose Run Uriah is from the 100 percent producing mare for Rose Run Farms. A and Gs Finest has five foals of racing age and all five have marks of 1:52.3 or faster. All five have also earned in excess of $100,000. She also has a two-year-old set to hit the track in 2022 by Check Six. The filly, named Martz Urene, was one of 44 sold at auction from the first crop of the Indiana sire Check Six and brought $34,000 at the Hoosier Classic Yearling Sale.