He may not be Indiana sired, but Rompaway Beau has spent many years associated with Indiana racing. The 14-year-old son of Chip Chip Hooray will call it a career Wednesday, Dec. 30 when he lines up behind the starting gate at Pompano Park for the third race of the night. The gelding starts from post four for driver Don Harmon and trainer Krista Harmon. 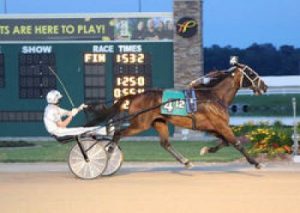 Rompaway Beau with driver Tyler Smith, wins the Open Trot at Harrah’s Hoosier Park in 2013, one of his many wins in Indiana between Hoosier Park and Indiana Downs. Photo by Linscott Photography

Rompaway Beau hasn’t missed a year of action on the track. He began as a freshman with skill, winning the championship trot at Raceway Park and has championship bloodlines. His mother, Rompaway Stacey, was also stabled at Hoosier Park in the mid to late 1990s for Mark O’Mara and went on to win more than $600,000. She also set a world record with a win in 1:54.1 at Scioto Downs in 2001. She passed her will to win down to her son, who has carried on the winning family tradition.

Born in 2008, Rompaway Beau won eight of 13 starts as a two-year-old and kicked off a stellar career. He won 11 races at three and has at least one win every year since, including 2020. His career best was taken as a seven-year-old at Harrah’s Hoosier Park in 1:53.4. He will complete his career with 302 career starts and goes into his final race with 68 career wins and more than $547,000 in earnings.

The most starts by a 14-year-old trotter was turned in by Uwantapieceofme with 19 starts this year. The most wins have been recorded by Fox Valley Photog, who has two on the year. On the pacing side, Best Dream Seeker has 41 starts, It’s a Good Thing has the most wins at 8 and most earnings for the year at $30,000. The fastest win for a 14-year-old pacer belongs to A Fool for Mark, who has a record of 1:53.2.

Rompaway Beau has spent his entire career in the Harmon Stable. Don also drove Rompaway Stacey in Michigan during her racing career, so he was aware of the talented family before acquiring Rompaway Beau. Rompaway Farms owned Rompaway Beau until 2015 when Krista Harmon took over ownership. The Ohio bred gelding makes his 25th start of 2020 for the Harmons on Wednesday.