Rollonbeauty, last year’s Governor’s Cup Championship winner at the Indiana State Fairgrounds, kicked off the first night of Indiana Sires Stakes action Friday, May 21 at Harrah’s Hoosier Park. The three-year-old daughter of Time to Roll was the first of many ISS winners on the card. 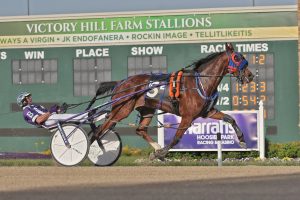 Rollonbeauty and Brandon Bates kicked off the 2021 series of Indiana Sires Stakes at Harrah’s Hoosier Park Friday, May 21 with a win in record time for owner-trainer Curtis Rice. Photo by Dean Gillette

With a purse of $49,000, the first of two divisions for sophomore pacing fillies started off the night in Race 2. Rollonbeauty and driver Brandon Bates got away from the gate on top and passed by the quarter pole in :25.4. Uncut Gem and Joey Putnam quickly passed the duo up to take over at the half in :54.2. They continued to cut the mile into the stretch.

Rollonbeauty moved out in the stretch and paced home in :27.2 for the win in 1:51.2. Alwaysthebstplace and Michael Oosting finished one and one-quarter lengths back in second followed by Always a Miracle and Trace Tetrick for third.

A big longshot in the race, Rollonbeauty paid $33.60 for the win. The filly is owned and trained by Curtis Rice and was bred by Steve Wagler.

Rollonbeauty is now two for two this season. The mile also marked a new career best for the filly who earned her seventh career win and pushed her earnings over the $63,000 mark.

The other division for sophomore pacing fillies was won by Hot Mess Express and John DeLong. The favorites of the field, the Panther Hanover filly moved to the lead at the quarter and never looked back, opening up by four lengths at the finish for the win in 1:50.4. Somethingbeautiful and Lewayne Miller finished second over Shelly Rockwell for third.

Hot Mess Express paced home in :26.1 for the win. She is trained by Tony Alagna and owned by Sam Bowie, former NBA player and UK basketball star. Amy, Madeline and Ethan Giberson of Illinois bred the filly, who is now two for two in 2021. She took a new career best time in her first start of the season, a win at The Meadowlands in 1:50.0. She is now six for 11 in her career and has only finished back of second two times in 11 starts. She has earned a career bankroll of $168,000 after winning four of nine starts last year at two.