Rollinwitdaponyzzz lit up the tote board Tuesday, Nov. 29 in the $6,000 conditioned pace at Hollywood Gaming Dayton. Guided by Austin Hanners, the Indiana sired gelding stopped the timer in 1:54.2 at odds of 27-1. 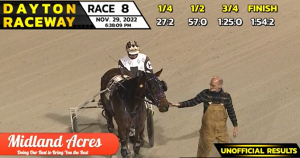 Rollinwitdaponyzzz and Austin Hanners are led into the winner’s circle by trainer Mark Laffin following their longshot win in conditioned pacing action at Dayton Tuesday, Nov. 29.

Starting from post three, Rollinwitdaponyzzz got away third as Medoland Brutus and Jeremy Smith set early fractions of :27.2 and :57.0. Heading to the three-quarter mile marker, the outer flow began to form led by Army of One and Jason Beattie. The pace picked up through the third marker in 1:25.0 and horses were on the move. Rollinwitdaponyzzz was gapping off McFreely and Cameron McCown, but Hanners began to ask the gelding for more pace. It took Rollinwitdaponyzzz a few strides to get going but he moved to the outside and was in perfect striking distance for the stretch drive.

In the stretch, Army of One was tough and rallying toward the lead. There were four horses across the track with Rollinwitdaponyzzz the widest of all. The Time to Roll gelding paced home in :28.3 to score the win by one-half length over Army of One. McFreely moved up the inside to finish third in the four-horse photo.

Army of One was the second longest shot on the board, paying $56.40 for the win. The four-year-old is owned by Randall Bond and Mark Laffin. Laffin also trains the gelding bred by Donald and Joann Filomeno of Illinois. It was the fourth win of the year for Rollinwitdaponyzzz. His career best time of 1:51.2 was taken earlier this year at Harrah’s Hoosier Park. With no wins in limited starts at two, he now has nine career wins and his earnings moved over the $65,000 mark with his win at Dayton.

Rollinwitdaponyzzz is the son of Gimmeazzzmooch, who took a mark of 1:53.1 during her career and made just shy of $100,000. He is a half brother to He’zzz a Wise Sky, who has a mark of 1:48.3 and more than a half million in earnings and is still racing. The only other foal of racing age from five total also has a mark of 1:53.3 and made $44,000 already in her young career.

Rollinwitdaponyzzz is from the next to last crop of Indiana foals by Time to Roll before he moved to Illinois. He was not sold at public auction as a yearling. He has had several owners through the course of his racing career and has been with the Laffin Stable since late August.