Roll Em was only one of two horses in his division that had taken a mark of under 1:50 when the field of 10 stepped onto the track for the three-year-old pacing colt and gelding leg of Indiana Sires Stakes (ISS) action Sunday, Aug. 22 at Harrah’s Hoosier Park. The sophomore pacer emerged with a new career best, lowering his mark to 1:49.1 in the leg. 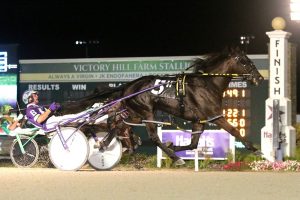 Starting from post five, Roll Em and driver Brandon Bates moved over to the inside as race favorite Rockin on Venus and Michael Oosting used their inside post to their advantage early, setting the first fraction of :27.0. Their time on the front end was short lived as Virgo and Trace Tetrick moved around and took control before the half in :55.0, continuing to lead the way through the three-quarters in 1:22.1.

In the stretch, Roll Em tipped off his second over cover and kicked into gear, rallying home in :25.3 to score the win, his fifth of the year, by one and one-quarter lengths over Virgo. Rockin On Venus finished third.

Roll Em paid $6.40 for the win. The Time to Roll gelding is owned by Burke Racing Stable LLC, Weaver Bruscemi LLC, Frank Baldachino, and Beasty LLC. David and Karen Arrenholz and DTM Stable bred the sophomore, only won two races last year at two. He was purchased by his current connections and moved to the Ron Burke stable in mid-June. Roll Em is the first foal of Feetonthedashboard, who took a mar of 1:52.1 and earned in excess of $240,000 during her career. His half-sister, Dash N Cache, is currently racing this year at two.

Earlier in the evening, two-year-olds were featured in several races, including freshman trotters in an Indiana Sires Stakes eligible race. Head Games, trained and driven by LeWayne Miller, pursued the lead from the start and took over before the half, soaring home to a four-length win in 1:56.1, a final panel in :27.4. Danny Dancer, the first foal from the standout mare Satin Dancer, finished second for Jay Cross and Top Tuxedo, a full brother to both Skyway Torpedo and Skyway Tinacious, finished third.

Head Games was making his first career start, breaking his maiden to win in 1:56.1. The Swan for All gelding is owned by Bill Beechy and Flying Manes LLC and was purchased in March of this year. Larry and Alan Troyer of LaGrange, Ind. bred the freshman trotter.