There are many Indiana sired horses that have fared well on the national scene. One of those horses is Rockin Ron. At the age of eight, the Real Desire Indiana sired gelding is still going strong and is working to increase his already big bankroll of more than $1.6 million in 2020.

Rockin Ron was showcased in an article by Ken Weingartner from USTA Media Relations and his owners have confirmed he is back for another season in 2020. Although they did not stake him, he could wind up back in Indiana at times for various events. He has competed in the Dan Patch Stakes in the past as well as Indiana Sires Stakes. His best time thus far was a 1:47.2 clocking at Mohawk and he has 34 career wins in 120 career starts, not missing a year of action his entire career. He is owned by Burke Racing Stable, Weaver Bruscemi, RTC and J & T Stables.

In the story penn 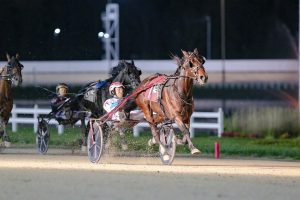 ed by Weingartner, the ownership noted the following quote regarding the purchase of Rockin Ron and the Indiana racing program:

“He’s on a long list of Indiana-breds that we’ve bought and brought east that have done so well,” said Weaver, who owns Rockin Ron with Mike Bruscemi (as Weaver Bruscemi), Burke Racing Stable, RTC Stables and J&T Silva Stables. “If you can do well in Indiana, I’ll take my chances; you can usually do well anywhere.”

Rockin Ron qualified earlier this week at The Meadowlands, winning his race in 1:52.2. He should be in the box to race soon.