There are several two-year-olds starting to emerge on the Indiana circuit with top speed and one of those was a winner on the Sunday, Sept. 12 racing program at Harrah’s Hoosier Park. Guided by John DeLong, Rockin Rebellion scored a closing effort for the win in 1:53.4 for the Trent Stohler Stable. 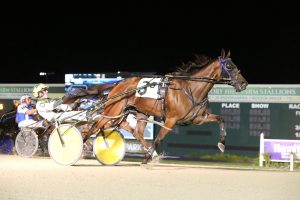 Starting from post three, Rockin Rebellion got away in mid pack as Odds on Blockchain and Don Harmon pursued the top spot on the outside at the quarter in 27.3. They were followed by Odds On Alpha Male and Joey Putnam, who took over the top spot before the half in :56.2. Odds on Alpha Male continued to lead the way around the final turn as challengers began to move up on the outside. Rockin Rebellion was holding his own along the rail.

In the stretch, DeLong tipped Rockin Rebellion to the outside and he soared home in :27.3 for the win by one and one-half lengths over Odds on Blockchain. Grigoriev and LeWayne Miller closed from the back of the pack to finish third.

Rockin Rebellion paid $28.40 for the win. The freshman gelding by Rockin Image is owned by the Trent Stohler Stable and Sheralyn Stohler Equine LLC. It was the first career win for Rockin Rebellion who was bred by the Stohlers and continues the legacy of the Velocity horses from the family operation.

Rockin Rebellion’s mother, Viva Velocity, is a daughter of the great Extreme Velocity. Rockin Rebellion is sixth foal from the mare, who is a 100 percent producer. Her quickest is I’vegotagirlcrush, who is still racing. She also has a yearling filly by Stay Hungry named Hungry Girl that will be on the track next season.

Rockin Rebellion was one of three winners on the card for the Stohler Stable. Other winners from the barn included Hilary Barry N in the $17,500 Fillies and Mares Open 2 in a time of 1:50.4 and Dude Included, winner in conditioned trotting action in 1:55.2. Both horses were driven to victory by DeLong.