Rockin Q, the longest shot on the board in the 10-horse final of the $22,000 Go On BB Final, scored an upset win Saturday, May 21. The Indiana sired filly was driven to victory by Michael Oosting. 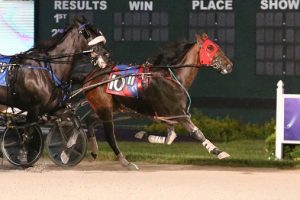 Rockin Q and Michael Oosting upset the field in the $22,000 final of the Go On BB series Sat. May 21 at Harrah’s Hoosier Park. Photo by Dean Gillette

Starting from the second tier, Rockin Q was able to get away in fourth place as race favorite Bettagettajetta and Brandon Bates went out for the lead and were joined by Hugs and Kisses and Sam Widger, who sat on the outside through fractions of :26.1, :54.1 and 1:23.2. In the stretch, Bettagettajetta took over and had a challenge from Need to Breathe and Charlie Conrad on the outside while Rockin Q began to move up on the inside. At the wire, it was a close three-horse photo with Rockin Q getting the edge by a nose over Bettagettajetta. Need to Breathe finished third.

Rockin Q paid $106.80 for the win. The sophomore Rockin Image filly is owned by Tipperary Horse Blankets and Richard Smith, both of Illinois and trained by Ronnie Roberts. Lavon Miller bred the filly, who earned her first win of the year in her third start. The time of the mile was 1:52.0, marking a new career best for the filly.

In other action on the Saturday program at Harrah’s Hoosier Park, Rip Wheeler scored a win in the $22,000 Hal Dale final. The three-year-old gelding, owned by Jeff Fought Racing and David Fought, came from the back of the pack, picking up cover at the half, which was recorded in :56.0 by Past Due and Sam Widger, who were the second leaders of the race.

Rip Wheeler hit another gear as the field turned for home, pacing home in :25.4 to score the win by a length in 1:52.0. Oneshotatthetitle and LeWayne Miller finished second over Luckbewithalex and Atlee Bender for third.

Rip Wheeler was the favorite of the field, paying $4.80 for the win. The Rockin Image gelding is a homebred for the Fought Family and is trained by Walter Haynes Jr. The gelding named after the popular character on the television show Yellowstone is now three for five in 2022 and has not finished worse than third.  The mile also marked a new career best for the gelding, who moved his earnings over the $25,000 mark with the win.

Rip Wheeler is out of the tough race mare Novascotia Hanover, who took a mark of 1:51.1 and earned over a half million during her career before joining the brood mare band at Cornerstone Stock Farm. So far, out of three foals of racing age, she is a 100 percent producer, including Rock N Zeus (1:53.4, $53,000) and Uncle Richard (1:54.1, $26,000). She has a two-year-old colt by Always a Virgin named Nothinbutthebest and a yearling filly by Freaky Feet Pete named No Wiggle Room.