Rockin Paco made his racing debut an impressive showing, scoring the win in 1:53.3. The three-year-old Indiana sired gelding was unraced at two and now kicks off his racing career with a big debut. 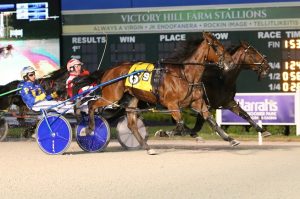 Rockin Paco and Joey Putnam rally down the lane to win their first career start in impressive fashion. Photo by Dean Gillette

Starting from post six, Rockin Paco and Joey Putnam got away third as Incredible Man and Brandon Bates set the first fraction of :28.2 in the $8,000 maiden pace. Restaurant Bully and Matt Krueger then took their turn on the front end, setting middle fractions of :56.1 and 1:24.4. At the head of the lane, Rockin Paco was ready to turn in a quick final quarter pacing the stretch in :27.4 to earn the win by a nose in 1:53.3 over Restaurant Bully. One Lucky Dude and Trace Tetrick moved in for third.

Rockin Paco paid $10.20 for the win. The Rockin Image sophomore is owned by Mark, Mervin and Jacob Graber, who bred the gelding. Joe Putnam trains the young prospect, who has an impressive pedigree.

Earlier in the night, another young prospect from an impressive family Annie Way Possible scored a win in 1:55.0. Driven by LeWayne Miller, the Odds on Equuleus filly moved to the lead at the half and never looked back, scoring the win in 1:55.0 by one length over Red Red Hot and Randy Crisler. Longwood Lolly and Sam Widger finished third.

Annie Way Possible is owned by Jeff Billings and Dylan Davis. Davis also trains the filly, who was bred by Silver Linden Farms. She is the daughter of Odds on JP, who has produced several six-figure winners, including Ticket to Rock, who has a mark of 1:50.3 and more than $1.1 million in earnings. Annie Way Possible is the most recent foal from the mare, who has 15 foals, nine of which have records.

Annie Way Possible, unraced at two, is now three for four in her brief career. The mile in 1:55.0 marked a new career best.