The Hoosier Cup is back at Harrah’s Hoosier Park. The $82,500 event for three-year-old colt and gelding pacers was the highlight of the Independence Day program which led into the community fireworks. 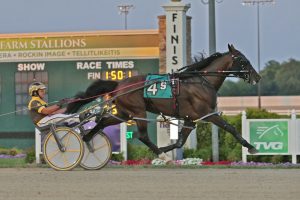 Rockin on Venus was a strong winner in the Hoosier Cup. Michael Oosting drove the Kelly O’Donnell trained colt. Photo by Dean Gillette

Rockin on Venus was favored heading into the event and he showed why he was favored, grabbing the win in 1:50.1. Starting from post four, Rockin on Venus got away in second as Whiskey Wizzard and Brandon Bates went to the lead at the quarter in :26.2. A lot of action continued to the half with Joelsyy Hanover and Dexter Dunn moving out and to the front at the half in :55.4. From there, Rockin on Venus, with Michael Oosting in the bike, also circled around and took over the lead past the three-quarters in 1:23.2. In the stretch, Rockin on Venus was dominant, coasting home to the win by two and three-quarter lengths with a final quarter in :26.4. Joelsyy Hanover finished second while Nick’s Monster and David Miller, a 62-1 shot, finished third.

Rockin on Venus is the ninth foal out of Venus Killean, who is a 100 percent producing mare. She has two million dollar winners, Keystone Velocity and Venus Delight. She also has a two-year-old this season by Fear the Dragon named Miss Venus.

Earlier in the evening, Hot Mess Express and Andrew McCarthy scored the title in the $110,000 Nadia Lobell in 1:49.1. The Indiana sired sophomore defeated open company in the event.

Starting from post five, the Panther Hanover filly got away in mid pack and was eventually flushed out at the half in :54.0. When she reached the stretch she dug in deep and paced home in :26.4 for the win by one and one-quarter lengths. Grace Hill and Dexter Dunn finished second while Blue Diamond Eyes and Yannick Gingras finished third.

Hot Mess Express was the heavy favorite in the field. She is owned by former NBA player Sam Bowie of Florida. Tony Alagna trains the filly who is undefeated in five starts this year. The win also established a new career time for the three-year-old.

Hot Mess Express is the seventh foal from the mare My Heart Was True, who took a mark of 1:51.0 and made more than $266,000 during her racing career. She is nearly a 100 percent producing mare with the exception of one foal. Her two-year-old Kingofmyheart, a son of World of Rocknroll, has already started this season and she has a foal that was born earlier this year that is a son of Time to Roll named Rock the Rocket.