Rockin on Venus was able to edge out Virgo at the finish in the second round of Indiana Sires Stakes action for three-year-old colt and gelding pacers. The event helped highlight the Sunday, June 13 racing program at Harrah’s Hoosier Park. 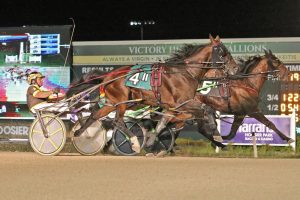 Rockin on Venus and Michael Oosting (outside) score the win in ISS action by a nose Sunday, June 13 at Harrah’s Hoosier Park. Photo by Dean Gillette

Starting from post four, Rockin On Venus and Michael Oosting got away well in the two-hole as Betterrock and Sam Widger were the first leaders in :25.4. Whiskey Wizzard became the second leader with Brandon Bates in the bike and led the field through middle fractions of :54.0 and 1:22.2.

In the stretch, Virgo and Trace Tetrick had used a first over trip to take the lead early in the lane with Rockin On Venus closing in after being shuffled back to fifth. At the wire, Rockin On Venus was able to sneak past Virgo by a nose for the win in 1:49.3. Virgo was second over Whiskey Wizzard, who was less than a length back in third.

Rockin On Venus is trained by Kelly O’Donnell for Emerald Highlands Farm, who also bred the colt. The three-year-old son of Rockin Image earned his fourth win of the season in seven starts. He only made two starts last year as a two-year-old. The mile in 1:49.3 was a new lifetime mark for the sophomore who has found his winning stride this season.

Earlier on the card, Goldie’s Legacy and Sam Widger scored a win in their division of ISS action. The Always a Virgin sophomore made the lead after the quarter in :26.0 and never relinquished his control, pacing home in :26.1 for the win in 1:49.2, a new career best. Trained by Jeff Cullipher, Goldie’s Legacy was a two and one-half length winner over This Kit Rocks and Joey Putnam. Rogers Image and Chris Page finished third.

Goldie’s Legacy is owned by Pollack Racing LLC and Cullipher. She is out of the good race mare from the Dr. Overstreet farm Ag-N-Au Bluegrass (pronounced Silver and Gold), who earned more than $300,000 during her career and a mark of 1:52.3 as an Indiana Sires Stakes champ. The win was the third of the year for Goldie’s Legacy, who boosted his earnings to more than $65,000.

The final ISS winner on the card was Brookview Bullet who has shot back to his winning form this season after a standout two-year-old year. Driven by Chris Page, Brookview Bullet was a near gate to wire winner in 1:50.3, a final panel in :26.0. Saddle Up and John DeLong finished second over Big Gulp and Jay Cross, who have transitioned from an undefeated season on the ISFC circuit last year at two to being a competitive contender on the ISS. The time of the mile was 1:50.3.