Rockin Nola and Joey Putnam rallied through a driving rainstorm to win the $22,000 Fillies and Mares Open Pace Sat. July 11 at Harrah’s Hoosier Park. The duo scored the win in 1:51.0 over the sloppy track surface. 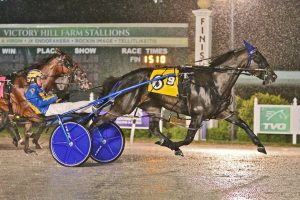 Rockin Nola and Joey Putnam prevailed through a driving rainstorm in the Fillies and Mares Open. Visibility was very poor for the drivers through the storm. Photo by Dean Gillette

Starting from post five, Rockin Nola used early speed, but was caught wide at the first quarter in :26.3. Once they were on the backstretch, they cleared Somebodyslilly and Andy Shetler to set middle fractions of :55.1 and 1:23.3.

Several horses came after Rockin Nola in the stretch but she held strong, winning by one and one-half lengths. Sweet Heaven, who had a broken head pole, finished second for John DeLong while Mystical Carrie and Trace Tetrick finished third.

Rockin Nola paid $3.00 as the favorite. She is owned by J P Racing LLC and Suttons Bay Racing. Mahlon Lambright bred the talented Rockin Image mare, who now has three wins this year. Overall, she has 36 wins in 77 starts and more than $818,000 in earnings. Her career best time was taken last year at Harrah’s Hoosier Park in 1:48.4, which at the time was a new track record for older pacing mares.

Also on the card was a $22,000 Open Handicap Trot with a repeat performance by Whata Swan and Trace Tetrick. Following their track record performance last week, the duo came from off the tempo, traveling first over to the three-quarters in 1:25.4. In the stretch, Whata Swan kicked it up a notch and rallied home in :26.2 for the win, just a half-length over Dunbar Hall and Sam Widger, who also trotted home in :26.2. Majestic Player A and Michael Oosting finished third.

Whata Swan is trained by Luis Quevedo for John Barnard. The Swan for All six-year-old is now five for eight in 2022 and 35 for 106 lifetime. Whata Swan has more than $540,000 in earnings.