Rockin Nola has long been a threat among the top Indiana sired pacing mares in the state and she proved that she’s just as tough at age five with a dominant win in the Fillies and Mares Open Pace II Sat. May 8. Her mile established a new career mark of 1:49.3. 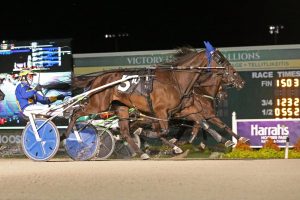 Starting from post seven, driver Joey Putnam hustled her out of the gate and was parked past the quarter in :26.3 before clearing to the front. At that point, Rockin Nola set the tempo of :54.2 and 1:22.3 before pulling away from the field. The Rockin Image mare stepped it up a notch in the stretch, pulling away to a five and one-half length advantage at the wire for the win in 1:49.3, a final panel in :27.0. Sweet Filly and Louis Roy finished second over Checks On The Way and Trace Tetrick for third.

Rockin Nola was the second favorite of the field, paying $5.40 to win. She is owned by JP Racing LLC and Suttons Bay Racing. Joe Putnam trains the talented mare, who was bred by Mahlon Lambright.

Rockin Nola now has 22 wins in 49 career starts. The mile was her first win of 2021 and established a new career mark. She is closing in on $600,000 in career earnings for her connections, who have had her since her two-year-old season. Rockin Nola was a $15,000 yearling purchase from the Hoosier Classic Yearling Sale by Team Putnam.

Earlier in the night, Bridge to Jesse’s and John DeLong won their second race in the past three weeks in the Open Trot. The duo led nearly gate to wire in the 1:53.0 mile, holding off a late charge by Swan in Motion and Trace Tetrick, who finished a head back of the win. Compelling and Verlin Yoder finished third.

Bridge to Jesse’s is trained by Roger Welch and owned by William DeLong, Patrick Delong, Ray DeLong and Welch. The eight-year-old veteran trotter by Jailhouse Jesse surpassed the $1 million mark in earnings last fall. He now has two wins in five outings for 2021 and has recorded 48 wins overall in 115 career starts.