Rockin Nola, the talented older female pacer from the Joe Putnam barn, turned in an impressive performance during Ohio’s Super Night at Scioto Downs, winning the $40,000 Fillies and Mares Open. Driven by Joey Putnam, the Rockin Image mare stopped the timer in 1:51.0. 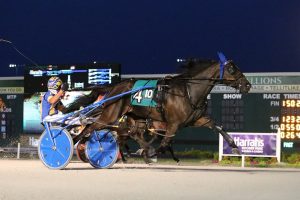 Starting from post seven on the five-eighths mile oval at Scioto, Rockin Nola never saw the rail. She was parked every step of the mile as Miss You N and Brett Miller set fractions of :25.0, :55.2 and 1:23.0. Putnam flipped Rockin Nola three wide in the final turn and the mare took off, striding right on by her opponents to win with whip tucked for Putnam, a final panel in :27.2. Big Bad Jane and Dan Noble finished one and one-half lengths back in second over Miss You N for third.

A big upset in the field, Rockin Nola paid $28.20, $14.40, $5.80 across the board. The four-year-old mare, bred by Mahlon Lambright, is owned by J P Racing and Suttons Bay Racing. It was the fifth win of the season in 10 starts for Rockin Nola. Earlier this year, she took a career best mark of 1:49.4 at Harrah’s Hoosier Park. She is now on a two-race win streak and is less than $12,000 away from earning a half million in purses.

Indiana fared well on the Ohio circuit Sunday at Scioto Downs. Earlier on the card Majestic Player A won the $40,000 Open Trot with Brett Miller in the bike. The six-year-old Australian born gelding by Majestic Son, rallied home by more than two lengths for the win in 1:51.3. Mission Accepted and Chris Page finished second over Lane of Stone and Jeff Nisonger for third.

It was the 12th win of the year for Majestic Player A, who leads the nation in wins for trotters this year. Jeff Fought Racing, Brian Carsey and Casey Myers, all of Indiana own the trotter. Walter Haynes Jr. serves as the trainer of the standout Majestic Player A, who has accumulated more than $138,000 since arriving in the United States.

The Wrenn Stable also earned an impressive win on the Super Night card as Guinevere Hall won the sophomore Ohio Sires Stakes Championship in 1:53.1. Driven by Peter Wrenn for wife, Melanie, the Cash Hall filly was a three and one half length winner in the $300,000 event.

Little Rocket Man, the standout pacer from the Missy Essig barn, also raced well, finishing second in the first of two $100,000 #SendItIn Invitational Paces. The mile was in 1:48.3 and Little Rocket Man finished a half-length back of Brassy Hanover, trained by Jeff Cullipher and driven by Andrew McCarthy. Little Rocket Man, driven by Trace Tetrick, cut the mile before being nabbed at the finish line. He paced his final panel in :26.4 and was four lengths ahead of the third-place finisher, Southwind Amazon and Ronnie Wrenn Jr.

Finally, GD Western Joe, trained by Ron Burke and driven by Chris Page, won the $40,0000 Open Pace in 1:49.3. The Indiana bred son of Real Desire was a neck winner over Gold Digger King and David Miller followed by Turbo Hill and Brett Miller. All three were timed under the 1:50 time barrier.

Bred by Gerald Yoder, GD Western Joe, a five-year-old, is owned by Burke Racing Stable, Hen-Shaut Stable, J & T Silva-Purnel and Libby, and Weaver Bruscemi. The mile was a new lifetime mark for the horse, who is just under the $500,000 earnings mark.